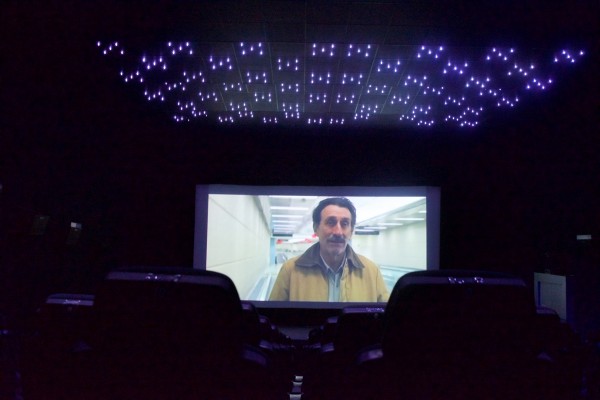 A Three-Pronged Exploration of Contemporary Bolivian Cinema, in Brief

It is a Tuesday afternoon and I am at La Paz’s opulent five-level shopping mall, MegaCenter, complete with bowling alley and ice skating rink. I enter through the living room – the ground-floor entrance, a showroom of leather and glass – and pace across the tiles through to the main atrium, past the Cadillac on display, past the ball pit, into the elevator. To the top floor, lightning-fast. Too high. Kiddy pool and Japanese steakhouse. One floor lower: food court. Pollos Copacabana, Subway, Burger King – ¡capitalistas! – and I find myself hustling past a labyrinth of metal dining sets to make it to my movie on time.

Where am I? A carpet of dizzying patterns but nobody’s walking on it. I feel a fiendish hunger for popcorn. Buttered or grape? I choose the norm, but the cashier throws a few grape kernels on top. Free sample. Glad she did.

Entering the theater, I step into a parallel dimension, far from brickhouse tiendas, wild dogs and car exhaust, into a gargantuan hall filled with pillow-soft, throne-like seats. The surround-sound system nearly explodes my eardrums as the doldrum American film, Escalofrios, starts up. One hour and 39 minutes later, I re-emerge, eyes blinded by the fluorescent lights. Entertained, but mostly confused at myself for piddling my life away in this big-budget excuse for product placement. Only later do I find out that Escalofrios – known in the US as Goosebumps – is being played in more Bolivian theaters than any other movie. Even any Bolivian movie.

From the teleférico, I see the whole of this city, situated in its bowl-shaped valley. I peer down on Cinemateca Boliviana, which is showing Bolivia’s own big-budget films, such as Boqueron, El Cuarto and Norte Estrecho. I see that this city is infinitely more important than its 25bs, empty-theater-going, American blockbuster experience.

Cinemateca Boliviana, Sopocachi. Sinking into large, regal seats of deep red, we await the picture. As the first previews start to roll in our modern amphitheater, I catapult the first fistful of popcorn into my mouth and strap in for the spectating.

Here, I bear witness to award-winning Bolivian cinema. Set primarily in the US state of Virginia, the Bolivian-cast, Bolivian-directed film Norte Estrecho represents the direction that Bolivian cinema has moved toward in the past few years. With its heart-tugging, orchestral soundtrack and linear, emotional plot, the film echoes a Western filmmaking tradition, but its message – the strife and success of Latin American immigrants living in the United States – is presented as uniquely Bolivian. In this way it is a quintessential reflection of Cinemateca Boliviana's foremost goal: the presentation and preservation of Bolivian cinema.

In the words of Claudio Sanchez, director of programming at Cinemateca, ‘Cinema is a production of messages.’ In effect, Escalofrios and Boqueron – a historic drama set during the time of Bolivia's Chaco War – provide the viewer with vastly different messages. A historically knowledgeable Bolivian watching Boqueron, and a foreigner watching it without understanding its cultural context, will see the film – and thus receive its message – differently. Differently, too, will the American tourist who sees Escalofrios – based on an American book series – relate to it than a Bolivian of the same age sitting next to them in MegaCenter.

I have been told that Sergio Pinedo Grillo’s Procrastinación is ‘a weird film.’ But I am utterly unprepared for the visual and audial madhouse that awaits me: shrieking laughing crashing, quietude calm, running destruction dancing.

‘I played around’, Pinedo, the film’s director, tells me. ‘I played with the actors, I played with the footage – edited it randomly, putting this here, this there.’ He adds: ‘I wanted this film to be sin guía’ – without precedent and or conventional filmmaking techniques. Similarly experimental, albeit directed with an emphasis on social, rather than artistic, change is Diego Mondaca’s Ciudadela, which explores the lives of inmates in La Paz’s San Pedro prison.

About the themes in his documentary/visual poem, Mondaca declares: ‘Any poetic work is a social work, and any social work is a poetic work.’ Such films, by Mondaca and his contemporaries, are currently on display in Buenos Aires, in a festival dedicated specifically to showcase innovative, contemporary Bolivian film.

For this markedly rural country, the Bolivian film industry exists as a result of urban socio-economic growth and the influence of Western media. But, for Cinemateca Boliviana and the many Bolivian directors in constant pursuit of new filmmaking techniques and uniquely Bolivian messages, the world of Bolivian film is a rapidly expanding artistic community.

It is now up to the next generation of Bolivian filmmakers to address the questions and problems that Bolivians face, one of which can be seen in the five-story capitalistic multiplex so expensive that many cannot afford it, so Westernized that all of the films shown there are from the US. Yet, through MegaCenter, Cinemateca Boliviana, the Internet, and Bolivia’s own film festivals, the filmmaking industry in this country will only continue to grow. I can only hope that the trend of grape-flavored popcorn does the same.