The Rise of the Past 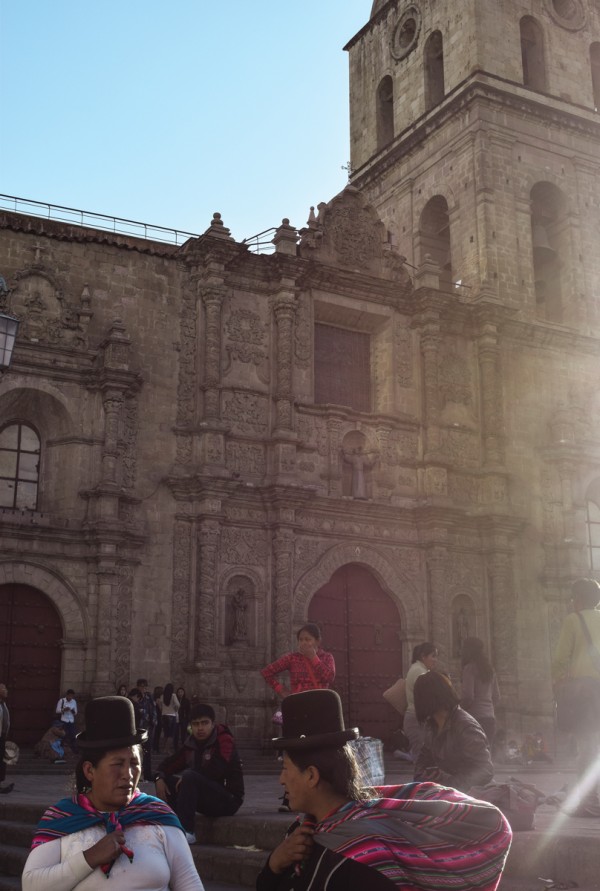 The largest indigenous groups in Bolivia are the Aymaras and Quechuas. The former are mostly found in the vast plains of the altiplano region on the west of Bolivia, while the latter are found in the east towards Santa Cruz. In both societies, religious beliefs revolve around the power of spirits that live in mountains and the sky, and natural forces such as lightning. Both indigenous groups often give offerings to the Pachamama, the goddess of nature, who has the power to make the soil fertile and ensure a good harvest, and her children, Inti, the sun god, and Killa, the moon goddess.

To learn more about Aymara traditions, I paid a visit to the Witches Market, the place to go if you want to buy materials for offerings to the gods. It is hidden behind the San Francisco church in central La Paz. There one can find shops full of colourful objects, talismans, coca leaves, and even llama fetuses and unto—animal fat statues.

Ada, a-14-year-old girl running her mother’s shop, said, “For me, this is just business, I have never done an offering to the Pachamama, but my parents and grandparents lived in the countryside and healed people with medicinal herbs. We sell everything here: mesas, crafts, herbs, medicine, llamas—everything.” When asked about her spiritual beliefs, she replied, “y family are Catholic, but they believe in the Pachamama and Inti as well as God. I believe more in God than the Pachamama, but I don’t go to church.”

Ada is an example of a growing population of Bolivians combining their Catholic beliefs with traditional practises and ceremonies. This trend is often attributed to the government and President Evo Morales, who is of Aymara origin. One big example of the government’s influence on spiritual culture came in 2009 with the declaration of the 21st of June, the Aymara New Year, as a national holiday.. Although it was  controversial, many people praise Evo Morales for empowering indigenous groups and ensuring that they are more accepted throughout the country. But as more people become involved in Aymaran traditions, the role of the Catholic Church, the most prominent religion in Bolivia, is changing.

Catholicism was introduced during the colonial period and adopted by 80 percent of the population. Today, only 70 percent of Bolivians are baptised, and only 35 percent of these actively practise their religion. Although the Catholic Church has always worked with Andean traditions, there are beliefs within Andean folklore which go directly against Catholic doctrine. I spoke to Giovani Arana, who works in the pastoral care section of the Bolivian Catholic Church, about the connections, and the conflicts, between these Andean traditions and the Catholic Church in Bolivia.

“I often go to the altiplano areas to promote Catholicism, but I find introducing celibacy very difficult and it isn’t accepted,” said Arana.. “In their culture, a man cannot be in a position of power unless they are married; therefore Catholicism contradicts Andean belief.’

“It used to be the families and schools who educated people about the church,” Giovani continues. “But now the schools only teach ethics, and families let their children make their own choices. The government has moved against everything colonial, and that includes the church. The state is not secular, it is anti-Catholic.”

Giovani described the church’s work in promoting Catholic beliefs in more traditional societies as “ cultivating the Catholic tree. They assume the positive aspects and purify the negative ones.”For example, Catholics have a respect for all life, including animals and humans; therefore the church can’t accept animal sacrifice. However, the sacrificing of animals is very important in Andean tradition, especially in August, the month of Pachamama. At the Curva del Diablo, which is located along the motorway connecting La Paz and El Alto, animal sacrifices such as llamas, cats, and dogs are made to the Supay, the god of death and the underworld. Until 2009, there was a sacred stone at this location but the Catholic Church removed it to discourage the animal sacrifices.

But the content of many religious festivals now shows evidence of traditional beliefs, including the Gran Poder festival. This traditional Andean festival involves folkloric dances and singing, such as the Diablada (Devil’s Dance) and the Morenada (Dance of the Black Slave), but the participants also pay homage to El Señor del Gran Poder, Jesus Christ. When it began in the 1930s, Gran Poder was a simple candlelit procession performed by Aymaran migrants living in the market district, but it has now evolved into a major international street festival, famed for its exuberant parties, elaborate costumes, and enormous crowds. The growth of this festival is an example of the growing influence of the Aymara people and the improved attitude towards these traditions by the non-indigenous population of La Paz.

Back in the Witches Market with Ada, I asked her about young people becoming involved in Andean traditions. “Oh yes,” she replied. “We learn about the culture, language, and traditions in school. I’m learning about how they traded with goods instead of money at the moment.”

Some say that these changes in education-brought on by government policy initiated by President Evo Morales-are the driving force behind the developing relationship between the Catholic Church and indigenous traditions. They say there is more freedom to make your own choices about what you want to believe, who you want to worship, and how you want to show it, opening the door for those wanting to practice the spirituality of their ancestors alongside Catholic beliefs.

When I asked asked Ada if she thought more people were becoming involved in Aymaran culture, her answer turned to the changes that have occurred around her. “I’m not sure,”she said. “But thanks to Evo Morales, more people accept these kinds of things.”

She gestured around her shop. “He introduced Aymaran beliefs. Before him, we were prohibited to sell llama foetuses.”