THE RISE AND FALL OF THE HUMAN PHONEBOX 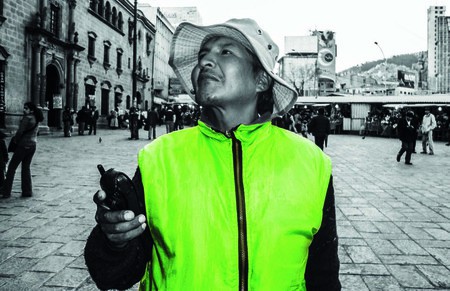 Originally written in 2008, this piece documented the gradual decline of a once-popular occupation: that of the chalequero. Their work consisted in providing phone calls (by the minute) to passersby who didn’t have a mobile phone or were out of credit. Now almost entirely extinct, the chalequero can only be found in the city’s outskirts.

I walked naively from plaza del estudiante to San Fransisco church in search of a ‘chalequero’.

On the way I came across innumerable phone boxes, call centers, kiosks with up to six phones, and even a shoe shiner who sold calls from a telephone built into his stand. I walked up from Calle Comercio and asked one of the street performers if he had seen a chalequero in the area. ‘They rarely come here. Go to the Plaza De Los Heroes, near the heads... know where I mean?’

I followed his instructions and headed over once more to San Fransisco Church and its surroundings. In one corner, under the midday shadow I saw a solitary sun-burnt man wearing a neon green waistcoat. ‘I was looking for you!’ I said, whilst he nimbly marked a number for a man in a hurry wearing a three-piece suit and holding a briefcase.

He looked at me suspiciously, taking another phone out of his pocket, gesturing at me to dictate a telephone number to him. The man in the tie was now mid-conversation. I said I wanted to ask him some questions as I took out a tape recorder from my rucksack.

He told me his name was Wilfredo. ‘I have been a chalequero for two years. I work at San Francisco from 11 in the morning. The best times for me are from 4 until 8, there’s more activity around here. Chalequeros have existed since 2002 or 2003, but there are fewer of us all the time’. I ask him about territory. He interrupts me ‘yes, of course, if another chalequero arrives [he mimics a violent gesture]....we have always protected this area. There are five of us here’.

There are two main reasons for the extinction of the chalequeros. On the one hand, the increased ease of installation of mobile telephone spots means that any shop-keeper can offer passersby phone calls. It’s like phone boxes springing up everywhere. On the other hand, the existence of these local personages has seen itself threatened by Supreme Decree #28994, which states that calls must be charged by the second instead of the minute. For the time being, they are not regulated or taxed by the Telecommunications Regulatory Agency (SITTEL) who have exempted them from this law as they are providing a private service and taking part in an alternative form of employment.

Chalequeros also exist in other countries. In Peru there are people who offer special SIM cards for chalequeros which claim to guarantee their profits. A few years ago they became a concern for Colombian mobile companies who saw them as resellers of their services.

Yet it could be argued chalequeros offer a value-added service. If the other line is busy they will redial a couple of minutes, later, and quickly re-approach you if it starts ringing. I’ve seen chalequeros following businessmen who walk hurriedly to some appointment while using one of their phones, somewhat like a mobile phone box. Sometimes the phone found its way to you instead of the other way around.

But what would happen with the chalequero if the rising number of puntos telefónicos comes to invade this small fort? ‘well the clients will drop, but because I have another job I’m only here during my free time.

And what is the life of a chalequero like? ‘Well there’s the heat... it’s a sacrifice. In the wet season you also have to find places to hide from all the rain. It pays well but that’s because there are not many of us.

‘Sometimes I have clients who call asking the other person “where are you?”, on the other line they respond with “I am here! Waiting for you”. The client turns around and realises the other person was behind them all along. Sometimes couples fight; one day someone spoke for an hour with his girlfriend. I charged him sixty Bolivianos and went home happy.’