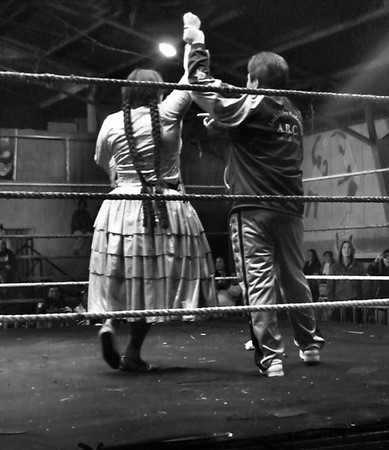 Cholitas luchadoras: the strapping heroines of El Alto's weekly cholita wrestling. Every Sunday tourists and locals alike pack the Multifunctional Centre in El Alto to watch the ladies pound their way to victory. As queues advance well beyond the entrance and the stadium fills up, it is clear that this activity has become an ingrained part of the culture and society of El Alto, with many families attending religiously each week. But cholita wrestling is difficult to define. Beautiful and brutal, should we understand it as a competitive sport or a staged circus act?

The idea for fighting cholitas originated from the "Titanes del Ring", a popular group of male Bolivian wrestlers that fight in El Alto. Their sport is an example of professional lucha libre wrestling, which has developed throughout a number of Spanish-speaking countries and has been taking place in Bolivia for over 50 years. In 2001, as the audience began to fizzle away and show numbers took a blow, Juan Mamani, president of the Titans and wrestler himself, began to think of creative ways to recapture his fans. It is these beginnings that can cast doubt on the authenticity of the show as a sport. Mamani first thought of introducing fighting dwarves, then moved on to wrestling women. This somewhat bizarre progression indicates little respect for dwarves or women: the vision was of a popular freak show. Nevertheless, Mamani's open audition call was surprisingly well received, bringing in around 60 respondents. With the introduction of indigenous Aymaran women, Mamani's aim to attract more fans to watch professional fighting proved successful.

Several years have passed and the event now sees over 1000 fans enter its doors each week. People from all over the world come to witness the immaculate fighting cholitas, dressed in their many tiered skirts, flat shoes and colourful shawls, balancing bowler hats on their plaited hair. Audiences find the choreographed acts of the lucha libre fighters entertaining, especially when the fights involve a "good" cholita versus a "bad" cholita, and the crowd has the opportunity to become involved and take sides. The show's popularity is evident in regular attendance of local Bolivians from El Alto. They too are indigenous and suffer from the daily hardship associated with living in an impoverished area. For these spectators, the lucha libre performance is a form of cheap diversion, allowing them to forget about their problems and daily struggles, relax with their family and come together as a community.

Nonetheless, to some the idea of women wrestling remains totally incomprehensible, especially when they engage in fights against men twice their size, something that is often described as grotesque and unwatchable. So why do the cholita women choose to become involved in these physically demanding and violent stunt fights? After having visited the cholita spectacle twice it became evident to me that these women enjoy the experience just as much as their laughing audience. Although cholitas are paid around $13 per fight, this is not sufficient for them to wrestle full-time and the women are obligated to work in other fields. Most are out all day and every day selling their goods, and often have a family to look after back at home. Perhaps it is precisely because there is no living to be made from it, that being part of the Titans is always a passion and never a chore. Training and preparing for the shows allow the women to relax, have fun, and above all, feel that they are more than simply housewives and street vendors. Likewise, it is difficult to watch cholita wrestling without admiring their immense skill and physical strength. Of course the disparity in size between male and female fighters can sometimes be distressing. But it is impressive to witness those women who have reached an equal or greater skill level than the men, and are able to fight back just as hard. Nowadays in El Alto, the male fighters are just a warm-up act for cholita wrestling. Whatever dubious preconceptions female wrestling may have sprung from, the women have made a male-dominated profession their own, and are popular for it.

But it does not end with popularity. The pride and earnestness with which cholitas are motivated to partake mark its passage from freak show to serious sport, it seems likely that this phenomenon will continue to grow. Both times I experienced the fighting craze a cholita woman emerged from the fight with her face covered in blood. It is difficult to make out which of these wounds are real or part of the entertainment. But it is clear that the women recognise this sport as a physically tough activity: injuries are expected. When asked why she decided to become a wrestler, Chela la Maldita replied "I like all sports but wrestling is my favorite." She admits that it could be seen to be grotesque at times, but ultimately it's part of the game. Like any other professional sport it is competitive, and requires intensive training.

Aspects of the wrestling still retain the circus show characteristics that it began with: the costumes, the story characters, and most importantly the pre-determined fight outcomes. But the concept has come a long way since Mamani's dwarf dreams, and cholitas are now admired as true professionals. Not only are they respected by the audience in the same way that male wrestlers are, but by wearing their indigenous and overtly female outfits they also distinguish their form of wrestling. Rather than competing in a male field, they have carved a new niche for themselves, demonstrating how they can fight hard, win fights and become cholita champions.

The lucha libre performances in El Alto are without doubt the largest and most famous examples of the cholita sport. However, the security guard of the event confirmed that currently it takes place throughout La Paz. I was also able to find evidence that the National Wrestling Alliance holds events with the fighting cholitas in Potosí. Cholita wrestlers have attracted great attention to the wrestling scene in Bolivia, and their popularity is spreading throughout the country. With increased interest from world media, and the introduction of leaflet distribution and other forms of advertising, it seems likely that this phenomenon will continue grow. From its birth as a whimsical experiment ten years ago, we may be witnessing the escalation of an important part of future Bolivian sporting culture.