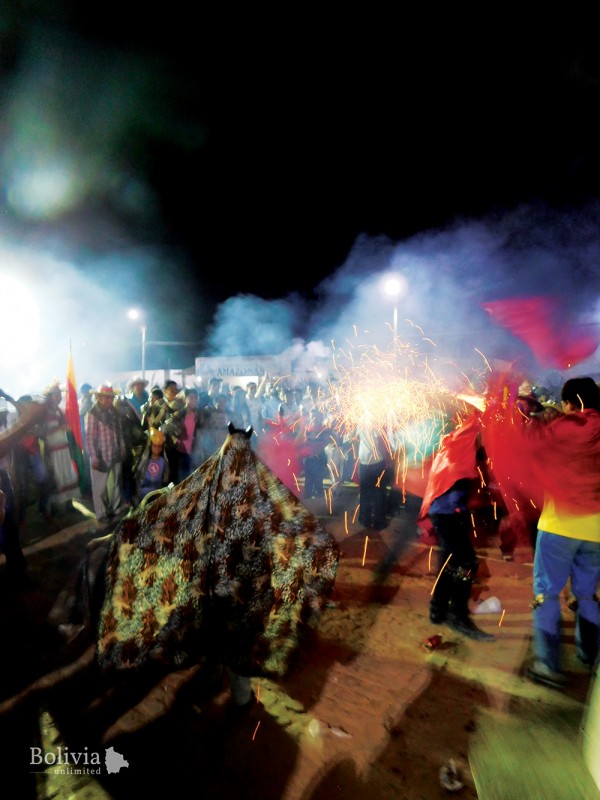 The colourful cacophony of an Amazonian town

San Ignacio de Moxos is usually a sleepy Amazonian town, but come the end of July, San Ignacio erupts into a festival of fire, faith and jubilation. This is the Fiesta de Moxos, a peculiar festival that celebrates the evangelising of the native people of Moxos the unique local culture of the region.

The festival is bewildering. It is both a cacophony of noise, emanating from a fleet of marching bands that descends on the town plaza, and a feast for the eyes, with locals of all ages adorned in fabulous colour. It is also well choreographed. The hundreds of performers seem to know exactly where to be and when, but most onlookers appear only to be able to gauge the spectacle, as the meaning of the parades is difficult to ascertain.

The most striking aspect of the fiesta is the warrior dance of the Macheteros. All the Macheteros are male and they dance solemnly to music from their colonial roots. What’s most impressive about the Macheteros are their phenomenal headdresses, which are adorned with effervescent Paraba feathers. Their dance is a Moxeño tradition from before the Spanish arrival and it is meant to show how everything that dies gets resuscitated. Thanks to the fusion of catholicism and indigenous Moxeño culture, the dance is seen today as a representation of the resurrection of Christ.

The festival is bewildering. It is both a cacophony of noise, emanating from a fleet of marching bands, and a feast for the eyes, with locals adorned in fabulous colour.

The festival focuses on how the Jesuit order that was founded by San Ignacio brought Catholicism to the Moxos plains and ‘civilised’– from the Spanish perspective – the Moxeño people. Archaeological evidence, however, suggests the Moxeño civilisation was one of the most sophisticated in the Amazon rainforest, which raises questions about why they appear to have embraced Catholicism with open arms.

Juan de Soto, a nurse from Santa Cruz who brought Jesuit priests to the Moxos plains in 1669, had first visited the Moxos region two years earlier. He wasn’t on a mission to conquer, or even to convert, but met travelling Moxeño businessmen and returned with them to distribute medicines. The initial relationship of the Jesuits with the Moxos focused on the exchange of cultural ideas. But the original Jesuit fathers grouped many of the local tribes together, which caused them to lose their languages and much of their original culture. There was then a smallpox epidemic in 1743 that decimated much of the population. The loss of language and culture, however, was more a strategy of transition to an fused cultural identity than an act of suppression by colonial overlords. The Jesuit priest Antonio de Orellana is said to have asked the first group of indians he baptised, the Casaveano Indians, whether their neighbouring groups, including the Tapimonos and Punuanas, wanted the same – though it is important to remember the reliability of sources about this period of history is questionable.

Yet, in spite of its history, the festival is still an incredible sight to behold. The main aspect is the parade, which starts at the indigenous cabildo in the back of the town cathedral, and makes its way all around the town. Along with the Macheteros are the equally striking Achus, masters of the forest and guardians of the flag of San Ignacio. The Achus wear sombresuits and have bizarre, clumsily large, wooden facemasks. Come nightfall, the Achus pack their intricate hats with fireworks, before running into the screaming crowds in a sea of sparks.

Joining the Macheteros and Achus are a host of weird and wonderfully costumed locals. Their costumes seem intricate and beautiful, but unfortunately much of their meaning seems to have been lost over the centuries. Even the names, Machetero and Achus, seem to have lost their meaning over time.

The highlight of the parade is the bust of San Ignacio himself. Strangely enough, it is he, and not Juan de Soto or Antonio de Orellana, who is most revered, even though he played a marginal role in the unique fate of the town. Then, there are the old ladies dressed in pink, and ‘roman guards’ who parade the bust, adding colourful weirdness to the extravagance of the celebration.

The final event is the local government’s parade, made up of mostly white and wealthy landowners who bears the flag of San Ignacio. Once the parade is over, most of the indigenous locals get drunk and enjoy a savage bullfight.

The highlight of the parade, is the bust of San Ignacio himself. It is he who is most revered, despite the fact he played a marginal role in the unique fate of the town.

A visit to the Fiesta de Moxos poses more questions than it answers. At a trivial level, one wonders what on earth one has witnesses and whether this is truly the most eccentric place on Earth. Historically speaking, one may wonder about the cultures that have been lost, despite the evident fusion of the Moxeño and Spanish civilisations.