THE DOGS OF LA TABLADA 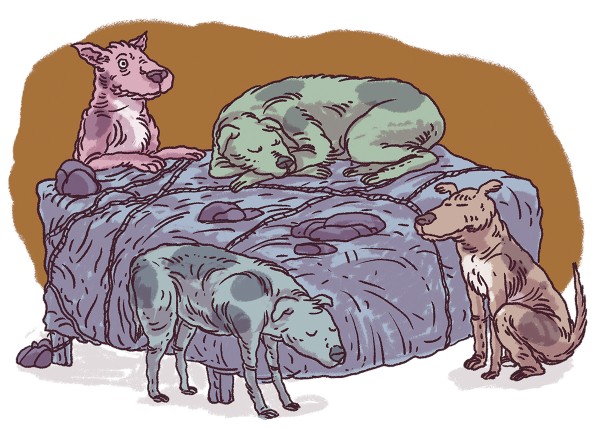 What do the dogs of La Paz have to offer? Besides their talents as road crossers, dustbin foragers and pedestrian schmoozers, for several stall owners in the Max Parades neighbourhood of La Paz, the local dogs serve as unofficial nighttime security guards.

The dogs of La Tablada, a side-street crammed with stalls selling clothes and children's toys, can often be seen sleeping together in the street during the day. At nighttime, they act as companions to the street’s security guards, watching over the wares of vendors who have packed up and gone home.

Local stall holders speak fondly of the animals, suggesting that they have won the favour of the street’s regulars. One vendor, Eva, tells me that people often bring the dogs food and that, although they are street dogs, the security guards are like their surrogate owners. Mateos Rojas, however, who is another stall owner, thinks that they may belong to residents of the nearby houses. Mateos’ own dog, Grupi, keeps him company during the day and comes home with him at night, a luxury that street dogs do not have.

Whether these watchdogs are truly from the street or merely the pets of less-than-hospitable owners, the animals of La Tablada have certainly found companionship in each other, as well as in many of the street’s locals. And for their hard work patrolling the streets, they’ve also found something more: that all-important cosy spot to sleep in.