The Catastrophe of Lago Poopó 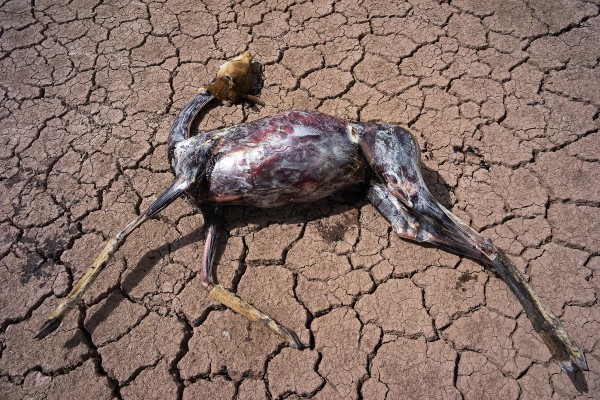 When Bolivia's second largest lake dries up, what is left behind?

A dead vicuña lies on the cracked, parched ground formerly known as Lago Poopó. As we approach it, the sunshine reflects off of its mummified muscles, making them appear like a hunk of scrap metal. I’m reminded of the wreckage of the old planes that litter the El Alto airport we passed this morning. A banana peel, shrivelled and blackened from the sunlight, lays a few metres from the corpse. It’s the only sign of human life for miles.

When we find the second vicuña it is accompanied by another banana peel that all but confirms our suspicions: this is the work of a human. Its throat has been slit, making a perfect nest for thousands of maggots.

The third body puts it beyond doubt. As well as an open throat, it has a pair of bullet holes between its ribs. Enrique Richard, the biologist and environmental investigator who is showing me around Poopó, turns to me and says, ‘La catástrofe se transforma en tragedia cuando mataron este animal.’ (The catastrophe became a tragedy when they killed this animal).

‘Yet although we drive for miles, the water never gets any closer’

The reason for their deaths is clear: all three vicuñas have been skinned for their lana, an incredibly fine and warm wool that is highly prized the world over and is the cause of poaching across the Andes. A kilo of lana can sell for over US$500, making the windfall from three vicuñas a substantial amount of money for anyone living in this remote part of the altiplano. It is an especially large amount of money for a fisherman who no longer has any fish to catch.

Lago Poopó, Bolivia’s second largest lake after Lago Titicaca, has completely disappeared in the last two months. Surprisingly, a lake once over six times the size of the city of La Paz has vanished. There are many factors at play. The lake had an average depth of 1.4m, which made it absorb more heat than deeper bodies of water like Titicaca. At 3,686m, its altitude combined with rising global temperatures and the El Niño phenomenon, leading to higher rates of evaporation. Despite these environmental factors, it is believed that the lake would not be dry were it not for the impact of industry.

Since the 1980’s, Bolivia and Perú have either licensed or ignored the diversion of water from Poopó’s tributaries for the use of the agricultural and mining industries. Increasingly in the last decade, more than 300 mining companies (including Huanuni, the largest state owned tin mine) have taken water from the Desaguadero river and the lake’s other tributaries, often returning it to the source highly contaminated. Various metals and even arsenic have clogged the rivers with sediment and reduced the flow of incoming water. This high level of contamination began to claim the lives of some of Poopó’s wild animal life even before the lake’s disappearance.

Out in the distance, stretching across the horizon is a constant mirage. Initially I believe in my eyes, in the reflections of the islands that rise from the plain. Yet although we drive for miles, the water never gets any closer and it’s then that I understand the illusion. Enrique swerves his Jeep towards anything that breaks the monotony of the barren lakebed. Alongside the slaughtered vicuñas are the corpses of multiple bird species dotting the Poopó landscape. There are flamingos, geese and ducks from the Andean region, as well as keñolas, one of the species most affected by this disaster. Among the corpses walk herds of cows, sheep and vicuñas, though I never get near the latter, since they have an understandable fear of humans.

Tending his flock of sheep as they graze on plants that are growing on the former lakebed is Felix Augustopampa. ‘All of the lake is like this. There are no fish. This is all that’s left,’ he says bitterly, gesturing at the vast expanse of arid desert. The irony is that all of this could have been avoided.

‘The catastrophe became a tragedy when they killed this animal’

So the question remains, what can be done to save Lago Poopó? One of the most expensive yet most effective options would be to dredge the lake’s sediment of the contaminants and residues. Given that the lake is currently empty, it would be cheaper and easier to do this now. Alone, however, this would not be enough. The contamination of the water must be curtailed and the diversion of Poopó’s tributaries must be drastically reduced and regulated.

By taking these measures, the Estado Plurinacional could boost credibility and show the world that Bolivia is treating climate change as the serious threat we know it to be. As of yet, the government has only been accused of mismanagement. It received €14 million from the European Union and set aside a further 897 million Bolivianos to solve the problems of Poopó, but the lake still disappeared. President Evo Morales has sought to shift the blame away from the government, proposing the possibility that the lake could return. After returning from the UN climate change conference in Paris in December, he said, ‘My father told me about crossing the lake on a bicycle once when it dried up.’ While the lake has disappeared before – as recently as 1994 – and may return with the rains, the state needs to be more aggressive in confronting the reality of climate change.

On the other hand, Enrique forcefully stressed that the responsibility for this disaster and the potential recovery doesn’t only lie with the state and the mining and agricultural industries, but with each and every Bolivian citizen. According to him, both the state and the majority of the Bolivian population have faced the effects of climate change with apathy and inaction. ‘Bolivians will march for virtually anything,’ he states, ‘but when it comes to climate change, there’s nobody on the streets.’ Enrique sustains there is a need for greater environmental awareness in Bolivia, and that general studies on climate change should be included in the Bolivian curriculum. ‘You cannot conserve what you are not aware of,’ he says.

One can only hope that the next generation of Bolivians will be as well-informed as Enrique’s 9-year-old daughter who, surrounded by the barren desert that was once a lake, told me of her desire for ‘paz y tranquilidad, y justicia para la naturaleza’ (peace and tranquillity, and justice for nature).