The Age of the Animals 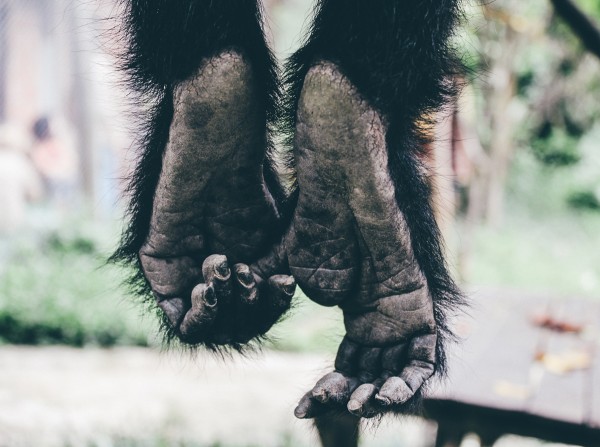 Animals around Bolivia suffer daily in the black market. Bolivian Express visited one place that rehabilitates these orphans of the jungle.

Author’s Note: Upon entering Sende Verde, a wildlife refuge in the North Yungas, I thought of Rudyard Kipling, who authored numerous stories from the perspective of animals which reflected the positive relationship between wild creatures and mankind. At Sende Verde, I saw the negative side of interaction between humans and animals, and thought to replicate his literary style to illustrate this sometimes devastating relationship.

IN the Not-So High and Far-Off Times, O Best Beloved, I was struggling to sleep in a cabaña upon the banks of the Yolosa River. I was getting used to the humidity of the Yungas, the alpine cloud forest of Bolivia, and found it profound here at Senda Verde, an animal refuge in the heart of a verdant valley.

At once I heard voices beyond the mosquito mesh, and I set forth to investigate, for I knew I would not sleep this night. It was with surprise that I found Senda Verde's animals in deep conversation not far from where I lay.

Colonel the parrot was protesting that when he had been poached from his rainforest to be sold as a pet, they had broken his wings to prevent him from flying. It would never be the same, he squawked indignantly. And I saw how indeed his right wing pointed unnaturally heavenwards, at right angles over his left.

Balu the howler monkey spoke. When poachers had taken him he had still been an infant upon his mother's back. But the way Man acquires baby monkeys for the black market is to shoot the mother. He had clung so desperately to her body when people attempted to pry him loose he had broken two fingers, and he now shewed the mangled digits to all assembled.

Tipnis the manic, spectacled bear stirred and all eyes fell onto her. Her tale all knew but she would regardless repeat it. Her mother, brother and herself had once walked into a part of the forest that was no longer forest, and had been chased by Man and his dogs. Man had killed her brother and kept Tipnis as a pet.

At last Maruka, the spider monkey with broken jaw and nose, entered the circle carrying an infant monkey in her arms. Maruka did not talk of personal ills but held the sleeping baby aloft. She softly explained – so as to not wake the baby – that when poachers had killed its mother, she had fallen from the tree onto the infant, leaving her legs immobile.

All animals hung their heads, for they mourned every arrival at Senda Verde. But Maruka concluded on a note strangely ebullient. Since coming to Senda Verde the baby was starting to regain some control over her legs – these animals’ lives may never be the same, but at least it was better than out there, in the Age of Man.

THE rest of Bolivia is found upon the Yolosa River's opposite shore. Since the country is one of South America’s poorest, the government is invested in revitalising the economy: through forestry, road building or land clearing for plantations. These actions deprive many animals of their homes, but whilst the government morally supports refuges that rehabilitate animals displaced by industry and poaching, commercial exploitation of the natural environment continues – there is no economic benefit in preserving animals. For this reason, the government provides no funding to the few places across Bolivia that care for the orphans of the jungle.

The tragedy of this epoch of exploitation is that the black market persists unabated. Senda Verde's animals nominally belong to the government, and there are organisations that scour El Alto markets for smuggled creatures, yet all action is after the fact. There exist no institutions to prevent poachers from stripping the rainforest of wildlife.

The majority of animals taken become household pets. But pet owners do not know the events surrounding these animals' acquisition – indeed, for every baby monkey brought in, a mother is left dead in the forest. And, as is often the case with high-maintenance pets, owners can tire of them, subjecting them to abuse, keeping them in ill-fitting cages and feeding them improperly.

Senda Verde cares for a constant influx of animals, currently numbering 530, and the black market is as strong as ever. Only 10 percent of poached animals survive captivity, making the orphans of Senda Verde lucky representatives of thousands of dead creatures. Add into the equation those animals in other refuges, kept as pets or still languishing in the black market, and the scope of the problem becomes evident: Tens of thousands of animals vanished from their native environment, unable to reproduce and sustain the wild population.

The reintroduction of captured animals into the wild is illegal. They could spread foreign bacteria into the ecosystem, if they are not killed by their own kind, and they are too human-dependant to survive on their own. For them, their best hope is to end up in a natural habitat like Senda Verde, under the dedicated care of the refuge's owners, Vicky and Marcello, and their team of vets, caretakers and volunteers. For while it is the exploitative Age of Man in greater Bolivia, it remains the Age of the Animal at Senda Verde.

HERE, the animals have a level of power foreign elsewhere in Bolivia. The first thing one sees in Senda Verde is the ‘human cage’ – an enclosed walkway. It is from within this that tourists may see the animals, in order to limit human interaction with them. Most of the animals are free to roam the entire length of Senda Verde. The old eco-lodge's swimming pool, along with a house, has been given over to the monkeys. Here, humans are second-class citizens, servants to a multi-species leisure class, making sure the creatures are warm by night and fed by day, and helping new arrivals – like the crippled baby spider monkey – regain some semblance of their wild lives. These animals would not have lived naturally this way, but it is better than out in the Age of Man. At Senda Verde, in the Age of the Animal, they can be free from fear and want – they can be safe.