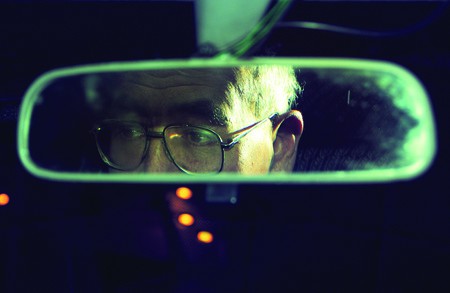 Urban lore has it that you’ll find a taxi driver roaming the streets of La Paz at night who will challenge you to a game en route to your destination. He typically gives you a green hardcover book - the 2012 Universal Almanack. “Ask me any question from that book”. The rules are as follows: for every question he gets right your fare increases by Bs.1 and for every question he gets wrong, it goes down by Bs.1 accordingly.

It’s on, Mr Durán. “What’s the capital of Burma?” I ask. “Burma, also called Myanmar. The capital used to be Rangoon, now it’s Naypyidaw. Do you want me to tell you the surface area and population?” He proceeds to quote them to the last digit, missing the surface area by a few kilometres. “I have a margin of error of 1%, it’s sometimes hard to remember the last few numbers”.

Mario Durán is a bespectacled and softly spoken man in his 60s who works the night shift in a pretty ordinary-looking taxi. He can often be found driving up and down the steep streets of Sopocachi, on occasion frequenting the Honguito fast food hangouts on the Belisario Salinas where he receives a discount in exchange for giving the workers a cheap ride home at the end of the night. “I work the night shift because I’m too old to put up with the traffic and social protests of the day time”.

Mario Durán knows the exchange rate, capital, population and landmass of every country in the Almanack (though he bitterly points out that in the latest edition, the surface area for 105 countries has changed in relation to the previous version, sometimes by as much as two digits). He also knows an ungodly amount of information about local and international football, sometimes to unthinkable levels of granularity. “The Bolivian Football league was inaugurated on the 23rd of August 1977 at 21:47 at the Radisson Hotel”. He continues: “Bolivar won the cup 17 times, followed by the Strongest who won it 9, then Blooming and Wilstermann, who have 5 championships each [he goes on listing teams and cup titles]”. His general knowledge is also impressive. “You can ask me any question”, he requests with a certain eagerness. I proceed to ask him to list the 7 Wonders of the Ancient World, which he patiently enumerates, with some hesitation towards the end. He knows he’s not infallible, and this is part of his charm and humanity.

“I am deductive. I inherited this trait from my mother. She was even more deductive than me, she could predict the future”, he says, not suggesting for a second that she had supernatural powers, but rather explaining that this ability resulted from being able to reach logical conclusions based on a set of facts. “I am also very analytical...numbers are my friends”.

Upon meeting him, people often wonder how an individual with such a prodigious memory and ease with numbers might not have been able to build a career as something else – a statistician or geographer, perhaps. Mario Durán  always knew he had a gift for remembering facts, even as a small child. “At school I was always in the top set of the class. One year I was even the best student – though I never dropped below fifth place”. However, due to financial difficulties he was never able to finish tertiary education. “My life has always been work. Right now my life is only this taxi – I have to work for 10-12 hours a day so have little time to expand other interests”.

Through some chance encounters, he is sometimes able to project his life beyond the taxi which he drives for a living. “One day I picked up Evo Morales – this was back when he was only a member of parliament”. He went through the routine with him; Evo picked China from the Almanack. “He congratulated me when I got every question right…and you know what? I knew he was going to be President”. How could he have known? “It’s because I’m deductive. I could see it coming through everything happening around me: the way people think, the situation with the country’s hydrocarbons; it was obvious really […]

I should have told him ‘You’re going to be President’. Maybe now I would be part of his team of advisors, or working for his government in some way.

Without displaying any conspicuous traits commonly associated with superhuman mental abilities (such as a lack of social awareness), Mario Durán is certainly a savant of sorts; the main evidence being, perhaps, his inability to explain how he does what he does. When prompted, he begins to talk about how he sorts countries by regions, and then associates them based on the last digit of their total population. It’s all very unclear. Most remarkable, perhaps, is his apparent inability to remember faces. “People are surprised when I don’t recognise them […] it’s interesting how people are born with different types of intelligence”.

I ask him who he admires. After some thought he mentions Gandhi, but quickly qualifies his answer with digressions that take him into a universe of facts and figures about India (how many languages are spoken there, the size of it’s territory, etc.), returning after several tangents to explain what a challenge it must have been to unite a country so vast and fragmented. It’s clear numbers and facts occupy a much larger part of his mental vocabulary than do ideologies. He also looks up to Angela Merkel, yet immediately relates this to how he admires the orderliness and dedication of the German people. Similarly, when I ask him which famous personality he would like to meet, he spends some time in thought before saying, “It’s hard to say, the probability of meeting them is so low it wouldn’t make sense to choose someone”. It is answers such as these that reveal how things work in Mario Durán’s brain. Things either are, or they are not, with limited room for what they could be. One wonders whether the subjunctive tests the limits of his mind more than the innumerable facts he keeps.

What does he hope to get out of this peculiar routine with passengers? “I want to encourage people to learn more, to become better prepared.” He tells me of the time he was treated by a bad doctor who charged him without curing his ailment, lamenting that individuals like these are symptomatic of the country’s lack of social and economic development. “The country can only move forward through knowledge. Of course, doing what I do also makes these journeys more interesting, and that is good. Bolivia is far behind other countries in the region. In terms of development indicators we’re 30th out of 33 countries. Worldwide we’re 136th. The country needs more knowledge”. He turns round the corner of the 20 de Octubre to leave me at my destination. “Why do I do this? Well some people tell me it’s the best taxi ride I’ve ever had in my life.” Mario Durán smiles. “I like that.”