Seeking the Past in Modern Bolivia 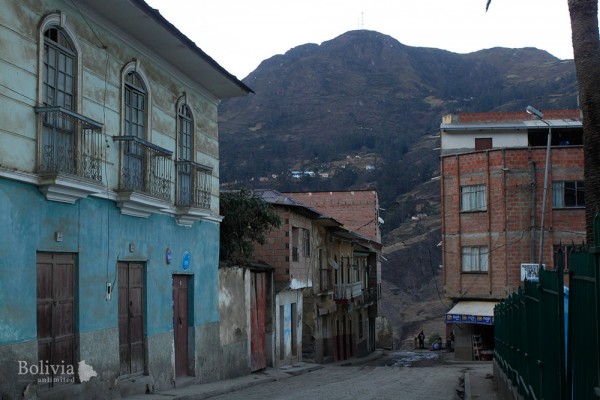 A journey to Sorata, to experience life in colonial times

Walking around central La Paz, amidst the exhaust fumes and market stalls, it’s hard to know what things were like at the time of Tupac Katari or Simón Bolívar. The city’s colonial buildings, the only obvious remnants from that age, are often a sorry sight. Hidden behind masses of tangled black wires, colourful old town-houses lie forgotten. Squeezed between messy red-brick new-builds and towering skyscrapers, the ornamentations and patterning is gradually eroded by the dust and fumes of passing cars.

Seeking a sense of what towns and villages were like 200 years ago, I decided to travel to the small town of Sorata, in the Yungas region on the eastern edge of the Andes. I took a three-and-a-half-hour minibus journey across the altiplano from La Paz to find a town that permeates old-world charm and a powerful sense of history.

Sorata was used by the Spaniards as a link to the gold mines and rubber plantations of Alto Beni, and a gateway to the Amazon basin. It is famed for holding a sensational 1781 siege, when indigenous leader Andrés Tupac Amaru and his 16,000 soldiers constructed dykes above the town to collect snowmelt from Mount Illampu. These were then opened, promptly washing the entire town away. More recent conflict was experienced during the 2003 Bolivian Guerra del Gas, when a hotel was burnt to the ground and a number of tourists were trapped in town amidst clashes between soldiers and villagers – all to the detriment of the town’s tourism industry.

The peaceful town I discover is a world away from all this. A series of winding cobbled streets lead onto a broad, verdant main square with a distinctly colonial feel, lined with restaurants and complete with a bandstand and towering, white-barked palm trees that offer shade to children playing and elderly sorateños alike. Yet the star attraction of the town is its architecture. Like the colonial architecture still evident in La Paz, these buildings are beautifully coloured and rich in intricate ornamentation. Unlike La Paz, though, the buildings still exist in considerable numbers and in close concentration. Built by the Spaniards  using riches procured from the gold in the area, many houses still possess original balconies and doorways, and courtyards centred around fountains that run using their original pump and water source.

However, there is a problem. Just as in La Paz, where citizens are currently witnessing the questionable construction of the towering Casa del Pueblo by the historic Plaza Murillo, there are little to no regulations or protective measures governing these buildings. This means that, for the most part, buildings are at best dilapidated, at worst falling down. ‘There is no cultural conscience,’ says Goyo Charly Lazo Colque, in charge of culture and tourism in the Sorata municipality. ‘Nobody is interested in conservation in Sorata, they just want to organise parties and make the people happy.’ Lazo wants to introduce building regulations, but a lack of cultural education means there is little appetite for that in the government bureaucracy. ‘There is an official working at city hall,’ Lazo says, ‘who has built a house of bricks, five stories tall, and you can see it right next to all this beautiful architecture.’

Lazo cites the division of wealth following family deaths, causing houses to be literally split between heirs, as a major factor contributing to the decline and varying standards of disrepair evident among the buildings. He also blames outsiders, often wealthy miners who are simply ‘not interested in the heritage of the town’, who build new red-brick property over the colonial houses. According to Lazo, ‘the government would rather spend their annual budget of 100,000 bolivianos on parties and celebrations’ rather than on efforts to protect local heritage. In fact, the opposite is occurring: the plazuela, which had until recently been a colonial square complete with original European railings, is being converted into a modern children’s playground. A vital civic amenity, yes, but one that is contributing to chip away at the town’s cultural heritage.

I ask Lazo if perhaps, given how they represent an exploitative and racist past, the decline and destruction of colonial buildings might not be such a terrible thing. He is quick to rebut me: ‘The majority of sorateños are direct descendents of Spaniards mixed with the Tiwanaku heritage; they are proud to be who they are and of their culture, both indigenous and Spanish.’ He says that many older sorateños who left the town in their youth come back in their retirement, such is their love for the town’s atmosphere. ‘You can always find them in the main square wearing their traditional outfits, with their old hats. They will always be there. They love it here; they call the town their paraiso terrenal [earthly heaven].’

Lazo sees tourism and foreign investment as possible ways of answering Sorata’s problems. The grandest house in all Sorata, Casa Günther, was restored in 2009 to feature in the German film Write Me – Postcards to Copacabana. Now tourists are returning to Sorata in large numbers following the Guerra Del Gas, for the most part to take part in trekking or other adventure tourism, but bringing in money all the same. The momentum generated by increased foreign interest and officials like Lazo, who are eager to capitalise upon it, could prove a winning combination for the revival of cultural heritage not just in Sorata but, by its example, in La Paz and the rest of the country. There is hope, then, for crumbling cultural heritage, that both government officials and locals can learn to see the worth of the historic cultural beauty around them, and that it can be protected and restored for the future.