REHEARSING WITH THE KORY WARMIS 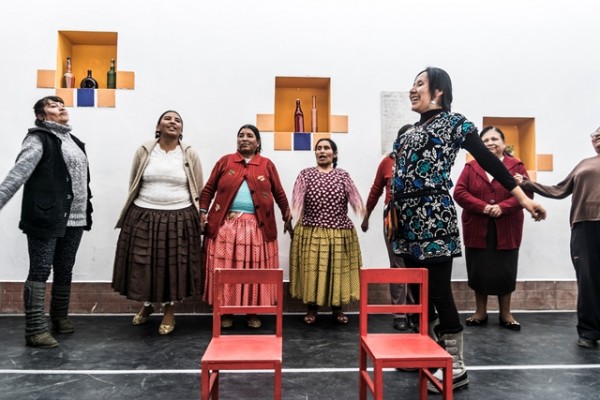 Women meet to create theatrical art – and to empower themselves

‘Get ready, you’re going to be backed against that wall once everyone gets here,’ Erika Andia warns me. Upon arriving at Calle Genaro Sanjines 986, it seems that I have completely lost my way. I find myself having trekked up what appears to be a purely residential road in the very center of La Paz. I press my ear against the door and hear a soft purr and scratches: there is life inside. And this is when Andia arrives, running up the street to greet me. She swings the rusty door open, and, as if through a portal, colour erupts outward.

She leads me into a small but cheerfully bright room, with playful orange-tiled recessions dotting the white walls. It is this confined space in which we are all to rehearse, although now it feels empty, expectant. I grab a tiny cobalt-blue playstool and sit down, waiting to meet everyone. Arriving in pairs, I get hugs and kisses from each woman who enters while being distracted from my mission by two resident kittens. The first women to arrive are Maria Paz and Jhovana Milenka Gutiérrez Hilari. We aren’t only expecting women, however. Two-year-old Gabriel, Jhovana’s son, runs up to hug me. He is the youngest Kory Warmi.

A theatre troupe which formed in February 2015, the Kory Warmis took their name from the Aymara phrase for mujeres de oro – ‘golden women’. It is a fitting name, as each member is a victim and survivor of violence and abuse, typically at the hands of a male.

To most of these women, rehearsing with the Kory Warmis serves as motivation to help themselves through their work week. ‘They are alteñas,’ says Andia, the Kory Warmis director and an accomplished actress herself, ‘comerciantes’. Many of the women in the group were initially members of an initiative of Pro Mujer, an international NGO dedicated to providing services to women, and joined the theatre group with Pro Mujer’s support, to pursue their acting dreams. ‘Now we are best friends and we are sisters,’ says Maria.

The Kory Warmis have embarked on a new play, Déjà Vu, which looks at the effect that tensions between a married couple have on their young daughter. I watch as 21-year-old Brayam Machaca Aranibar contorts his face in pain and agony during an argument with 30-year-old Ana Chambi Mayta, who plays his young wife.

This month, the theatre troupe will be performing Déjà Vu and another production, Kusisita, across several different barrios of La Paz, as well as opening Casa Mágica, their rehearsal space in La Paz, to the public.

During the rehearsal, Andia announces that the Kory Warmis will tour Peru in May. Smiles and laughter reverberate as the group is unable to contain their excitement. They are dreaming of travel and adventure.

The Kory Warmis’ children line up and begin to dance, whipping themselves in the progression of what is actually quite a cheery song. I sit next to Andia, confused and uncertain how to feel. It starts to dawn on me that perhaps this is their desired effect on the audience: to make us uncomfortable, unsure, and weary.

Here, our rehearsal is suddenly cut short at the realisation that over four hours of hard work have passed. The Kory Warmis begin to make their way home, small giggles of relief but an aura of dejection hanging low in the now darkening Casa Mágica.

The Kory Warmis are on Facebook under their name, where more information on current and future performances can be found.