Putting Shoes on their Feet 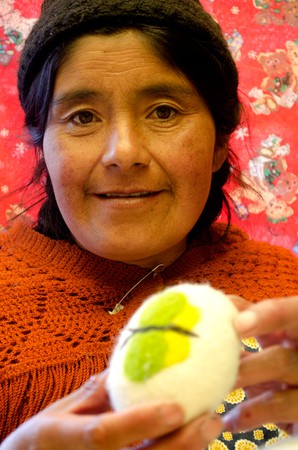 Zattaro is an organisation that works with small rural communities to create sustainable development opportunities through fashion products. Bolivian Express visits the women behind an initiative which aims to export shoes from the Bolivian highlands for the rest of the world.

It doesn’t really look like a workshop. We clamber out of the minibus onto a deserted street (well, deserted except for the flock of sheep being driven down the road) and Amelia, our guide and vice-president of the association we have come to visit, points out Huayna Potosí, its snow-capped peak glistening in the distance. We pass a few women sat knitting and eating stew and potatoes on the street corner, squeeze through a gate and are ushered into what looks, from the outside at least, rather like a garden shed.

Yet it is here, in this and other equally unlikely-looking locations on the outskirts of El Alto, that some remarkable things are being made. Lovely flower-shaped hair slides, outlandish hats and quirky jester-style slippers (complete with curly toes and bells): the shelves are piled high with these and even more interesting creations, whilst the walls are covered in what might be simple drawings, but could equally be designs for new products. What unites all of these objects? They are all crafted out of felt, and all are entirely handmade, from local wool that the compañeras, as they call one another, dye and then mould themselves.

The most recent addition to their repertoire makes its presence felt in the form of rows of wooden moulds lined up on a workbench: pairs of disembodied feet in a whole range of sizes. These are the result, Amelia explains, of almost two years of trial and error and revising of designs. Working with Zattaro, a La Paz-based organisation, the women have been developing a design for a shoe that they are hoping will win a market amongst the fashionistas of the USA, and even further afield.

If there is one remarkable thing about the women that make the Zattaro shoes, it is this: their ordinariness. They don’t consider themselves to be master craftswomen or even particularly talented, and when I ask Amelia how they learnt to make felt in the first place, she explains that it was thanks to the time and patience of a couple of visiting German missionaries. ‘It was so hard’, she says, ‘I couldn’t get the hang of it for ages, and I nearly gave up a few times, but eventually I got it, after three months’. She then went on to teach her friends, who helped one another: there are currently ten women in their village association, but they and Zattaro hope that by continuing to teach and share their skills, they can reach as many as two or three hundred.

The contrast between the conditions in which these women work and the quality of what they produce is also astounding. They explain that in a workshop like this one, two women can work at the same time: it would be nice to have more company and to make the whole process more sociable, but they simply don’t have the space. Doña Julia, another of the compañeras, says that she has no real space at all: ‘I just do mine on the street’. And of course, time spent on crafts has to be fitted around the tasks of their daily life: looking after their children, cleaning, cooking. It’s no wonder that the question of how long it takes to make a shoe is met with the simple response, ‘It depends’.
And yet despite the many obstacles facing these women, they are resolutely cheerful and optimistic about the future. Part of this is no doubt down to their partnership with Zattaro: the promise of a steady stream of orders and the opportunity to reach a wider market is obviously extremely important, since until now they have been selling what they can where they can, in the odd craft fair or a Fairtrade shop in La Paz, as well as to the occasional visitor. Marcelo Pereira, co-founder of Zattaro, describes his plan to develop the women’s system of working, training some of them to be supervisors and thus creating a career path and means of progression. He is also keen to support the education of the women’s children, and they all agree on the importance of this: they want brighter futures and more opportunities for their children than they themselves had.

However, although there are obvious financial benefits for these women in their involvement with the felt-making and the Zattaro shoe project, it is important not to forget the social aspect to their work. They explain that they work on all of the designs together, trying out new things and sharing ideas, and it has been Amelia who has focussed on the development of the shoes. Once an order comes in, they work together to complete it, using their different talents and strengths. Amelia describes their relationship as being ‘like a married couple. We sometimes argue, but then we make up and we’re all friends again’. And as they joke around, giggle at one another’s comments and take photographs of us wearing their hats, I realise that their ‘marriage’ has clearly been a very happy one so far: just as well, because if things work out with Zattaro, they’re going to have an awful lot of felt to mould and shoes to make.