Portrait of a Void 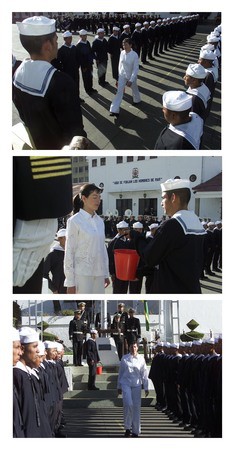 How has the loss of the sea influenced Bolivian contemporary art?

To those of us who come from a country surrounded by the sea, the plight of a landlocked nation, like Bolivia, is almost unfathomable. To us, the sea is simply a banal blue mass at the edge of a beach; something that represents very little. For Bolivians, however, the sea has a very different meaning. The sea represents a void, and a stretch of coastline endures to this day as a painful yearning.

That much can be gleaned from the events surrounding the Day of the Sea commemoration (every 23rd of March), or by viewing the giant poster in La Paz’s Plaza Avaroa —outside the Ministry of Defence— which reifies President Evo Morales’ stance on Bolivia’s “sovereign right to access the sea”.

In this context, it would only seem natural that Bolivia’s relationship with the ocean —which evokes such strong emotions— would transcend the politics and rhetoric of Bolivian-Chilean exchanges to permeate the world of Bolivian art and culture. Whether it is through painting, photography or video depictions of the Bolivian coastline, allusions to the sea are everywhere present in contemporary Bolivian art.

It might appear to outsiders that Bolivia is really no different from any other landlocked country. But it seems that it is one thing to have no sea at all and another to have had it taken away. When asked why other countries —such as Paraguay— do not have such a romantic relationship with the sea, Alvarado states that this is “perhaps because they’ve never had it”. You can’t, after all, mourn something which you never had in the first place.

The sea may not be the only element steering Bolivian contemporary art in a more melancholic direction. According to Alvarado there also exists a deep sadness ingrained within Andean culture. Indeed, the idea that living in the dry, cold, and at-times inhospitable environment of the Altiplano has psychological repercussions of this nature, has been hypothesised by several Bolivian authors from Arguedas to Francovich. Coupled with the indoctrination-like nature of Bolivian education system surrounding the maritime loss, the result is a sentiment of nostalgia, melancholy and helplessness which finds various manifestations in Bolivian contemporary art.

With the Bolivian Day of the Sea quickly approaching it is easy to see Bolivia’s relation with the sea as a largely political matter. However, the loss of the sea has had a far reaching impact on Bolivian culture and contemporary art. The rise of new media, such as video and digital drawing, have given artist new ways to depict this feeling.

“What’s past is present” says Alvarado—and this definitely seems to be the case in Bolivian contemporary art. While it may be difficult for a citizen of a country surrounded by water to even comprehend the Bolivian attitude towards the sea, the contemporary art scene here certainly brings you as close as you can possibly get can to understanding it.

“In general I would say that [the relationship between Bolivia and the sea] is very sentimental” says Narda Alvarado, one of Bolivia’s preeminent contemporary artists. Alvarado has employed the sea as a motif in a variety of her works, from digital drawings to video. This is most notably the case in the video she made showing members of the armed forces being given a bucket of water from the ocean, a gesture that emulates the sense of loss and yearning for the sea in Bolivia.

When talking about the representation of the sea in Bolivian art, Alvarado states: “I don’t think artists do it on purpose, I think it comes naturally. We have such a strong feelings on this topic that we feel that we need to do something with them”. Indeed, looking at the paintings, photographs and videos of local artists it becomes evident that much of Bolivian contemporary art about the sea is driven more by emotion than by an attempt to depict the ocean or assert a claim. This art is not based on politics, but on sentimentality.

This is certainly the case in Raquel Schwartz’s art piece El mar no existe (which in English translates to 'The Sea Does Not Exist'). In her piece, these words are illuminated against a backdrop in a sea-blue luminescent glow. It is a piece that conveys a dry and distant sense which the ocean now evokes for Bolivians, painting a bleak picture of the emotions felt by Bolivians when considering their loss. It captures the alienation caused by a sea which is always there, but always out of reach.

There is a sense of helplessness in Schwartz’s work that is expressed through a portrayal of insularity. Her work depicts a country that has been isolated from the world as a result of its landlocked nature, a country that can be seen as an island surrounded by an ocean of land. When asked how the loss of the sea has affected her work, Schwartz replies: “it doesn’t affect my artistic work, it nourishes it”.

In Bolivia, there is a culture centered around picking a beauty queen for almost every part of Bolivian life and, as Alejandra Alracón’s art shows, the sea is no exception. Alarcón created a video segment surrounding the Miss Pacífico beauty pageant that highlights the Bolivian nostalgia for its lost coastline. It shows young female contestants dancing to the tune of a military march titled Recuperemos Nuestro Mar (Let’s Reclaim Our Sea).

Through the implied superficiality of the event, Alarcón’s lo-fi video representation seemingly shows the popular trivialisation of this historical event, traditionally construed as solemn and tragic. Her work also shows how this longing has permeated every last sphere of popular culture. As Alarcón tells BX: “is as if the sea represents all that is missing. I wonder: If we had a sea, where would it go, that longing for everything we don’t have?”

Another Bolivian artist, Roberto Unterladstaetter, has managed to capture a different side of Bolivian emotion towards the sea. Unterladstaetter’s image of a human arm extending across a picture of the sea in order to raise a middle finger to the coastline discharges the pent-up resentment Bolivians feel over this historical episode.

Unterladstaetter portrays the malaise caused by the loss of the sea, which has had a profound economic, cultural and psychological impact on the country. This feeling of bitterness towards the sea —and more so towards the Chileans that stole it from Bolivia— is so pervasive that it was immortalised in the title of Antono Eguino's film about the maritime loss, Amargo Mar. Animosity between both countries continues, from Bolivia taking Chile to the International Court of Justice in the Hague, to football matches where Chileans fans taunt the bolivian crowd by singing ‘vamos a la playa’ ('let's go to the beach').

But the bitter feelings extend beyond the loss itself, and spill over into the way the topic is hijacked and appropriated with ulterior motives. As Unterladstaetter tells me, ‘The topic of the sea always resurfaces as a smoke curtain during moments of crisis, and the parties in power always dream with “solving” the issue to become enthroned as eternal heroes. As you can see, I now realise the issue affects me, as I already start to show resentment for some reason’.