Of Mines and Men 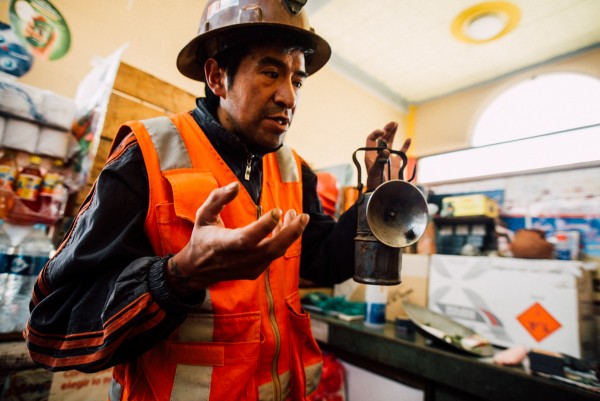 A world without light: terrifying for all, unimaginable for most, a daily reality for the miners of Potosí. Inside the bocamina, there exists a darkness beyond the lack of sunlight. Workers face the threat of deadly stumbles, accidental explosions, and falling rocks. Lung-shrinking carbon monoxide and temperatures that range from boiling hot to freezing cold punish their bodies as they work for hours without rest or food.

Light and dark, night and day, life and death. Reality in the mines is ruled by extreme juxtapositions. Inside the mountain live two deities: Pachamama, or Mother Earth; and Tio, her “husband-to-be.” Tio knows many forms, and many faces. According to Antonio, our miner-turned-tour-guide, in every mine there can be "three, four, five, more,’ statuettes that embody this figure. Once the miners descend into the dark, these dualistic deities determine their fate.

As we approach the mouth of the mine, Gustavo, the younger of our tour guides, explains that every job involving the boca mina has its dangers and its consequences. The miners take from the mines, just as the mine takes from them. ‘That's why we ask permission,’ he explains, as he drips 98% pure alcohol from a tiny bottle onto the ground at the entrance. This act, known as a Ch'alla, is a request to enter the mine and exit alive. Once for Pachamama, once for Tio, and once for the god above.

Slowly, boot by boot, we climb down long wooden ladders into the dark, following Antonio and Gustavo. Upon our descent, the world outside – its skies, its clouds, its sunshine – disappears. The low, rocky ceiling of the mine quickly consumes all light besides that of our headlamps. Our lungs writhe in the dusty, stale air. Blades of light catch the craggy, enormous rocks below. There is no way of telling how far we would fall, or if we would ever walk again.

Gustavo describes the mine as a house of ants, ‘una casa de hormigas.’ As we scurry behind him through twisting paths, down the narrow holes and up the rickety ladders, the metaphor surrounds us further. An ant is small and vulnerable. Inside the mine, so are we. In profound darkness, in extreme proximity to the rocks, we journey through endless tunnels, feeling like specks of dust in an impossible maze deep within the earth.

‘It’s time to reenact the movie, to be like Spider-Man’, Gustavo says, as he leads us in one direction, while Antonio leads the rest of the group in another. Immediately, we are nearly horizontal, scrambling higher towards another nivel of the mine, just like the superhero. As we struggle to keep hold on the rocks, Gustavo brings us to a gaping hole in the ground, a haunting abyss into which past miners have fallen. We peer down the hole, five or six levels into the mine, and light fades into darkness.

We tread on. High ceiling, low ceiling; squeeze past this and that. We arrive to the first Tio. The statuette smokes two cigarettes at once. He has bleach-white marbles for eyes, and a nose blackened from decades of chain-smoking. Littered around him are neon streamers, empty bottles of soda and beer, more coca leaves than one can count. We add more leaves to the pile and an offering of alcohol on top. Gustavo explains the reason for this: ‘No one can go into the mine, or take from it – even photos – without asking Tio for permission.’

On a normal day, one would see the mine, like an ant colony, crawling with miners. But today is Halloween, and there are few of them. We encounter one miner, who is just a boy. He smiles big, his mouth full of coca, when we hand him a two-litre bottle of cola. After visiting two other Tios and enduring the back-breaking boot-dance through tiny tunnels, we reached the largest, meanest Tio in the mine: Tio Jorge.

Red skin, curved horns, a massive erect penis. While the Tio resembles a stereotypically evil demon, for the miners, Tio Jorge is more than that. He allows them to remove the ore and grants a safe passage home. Tio is seen as benevolent. In fact, words such as diablo, ouija, and brujeria are strictly forbidden inside the mine. A figure of ‘dos caras,’ this dualistic spirit is both fatal and salvific for the miners, whose lives he determines.

The next time we see our guides, it is in quite a different environment. Ditching their overalls for sweaters and jeans, Antonio and Gustavo talk to us a world away from the depths they guided us through hours before. In this light, everything is more visible: gaunt faces, tired eyes, human emotions.

‘Every day, you think you are going to die,’ Antonio says, in brutal honesty. His father, a miner, never forced him or his brother to work in the mine. Yet, as is the reality for many youths of Potosí, necessity prevailed. ‘Mining, from my point of view, is a necessary evil.’

‘My brother told me, “you can work in the mines, if you’re ready to feel pain,”’ Gustavo remembers, who is also the son of a miner. He earned a grant to study in Potosí, but the high cost of university forced him underground. At the beginning, Gustavo worked long hours in brutal conditions; returning home in the evening to shower, eat three plates of food, and then go to university.

As tour guides, Antonio and Gustavo lament the psychological and physical impacts of their work. Though the miners may leave the mine, the mine will never leave them. 'I am partially happy, and partially sad,’ Antonio reflects. ‘Sad for my family members and companions in the mine. And sad for my lungs,' he says, in reference to silicosis: the pulmonary disease that miners contract through the inhalation of toxic particles below ground.

For miners, silicosis is the inevitable mal de mina that often shortens their life to no more than 35 or 40 years. 'We eat a lot, we drink a lot and still we can't put on weight,’ Gustavo explains. Before gauntness took to his face, it was much fleshier. More youthful.

'We have a human vision of tourism, not an economic one,’Antonio asserts. The goal is to tell the story of the mines through the lives of the people who work in them. 'The miner's hope,’ Gustavo adds, ‘is to leave the mine alive and be with his family.’ For the miners of Potosí, entering the darkness is the best way to bring light to their communities and families. Their work demands faith, endurance, and a willingness to die young. That is the measure of their sacrifice.