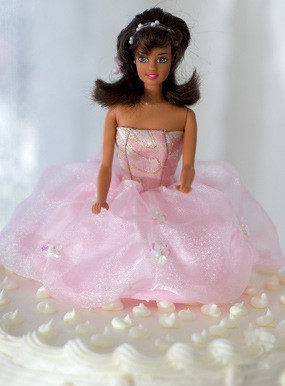 The church blessing, the Cinderella gown, the bouquet, the tiered cream cake, the first dance…all little girls dream of this day. The average schoolgirl has to make do with playing Polly Pocket weddings until her big day twenty years later; however, girls from Latino communities receive more instant gratification in the form of their quinceañera at age fifteen.

Strictly speaking, this isn’t a wedding: there’s no groom, no honeymoon and certainly no alcohol involved in the proceedings. This is a rite of passage that grants a young girl a “princess for a day” pass, ensuring that she, like a bride, is the focus of her family and community’s adoration. She has achieved the ultimate female accolade: womanhood.

A multitude of cultures and communities celebrate a teenager’s coming of age in a similarly ceremonious manner, the most widely known being the Jewish Bar Mitzvah to signify a boy’s entry into manhood at thirteen. Female rites of passage have often centred on long, regimented practices and prayer once a girl receives her first period, such as the ‘Navajo Kinaalda’, or strict, social introductions into polite society, as demonstrated by the waning French Débutante ritual. Although similarly rooted in tradition, the modern quinceañera blows these rigid rites out of the water.

A perusal of quinceañera boutiques in La Paz proves that it is the Quinceañera herself who is firmly in charge of proceedings. Whilst in the past the quinceañera was a more family-orientated occasion, modern day festivities seem to be modelled on the American Prom and Super Sweet 16 culture, a fairytale indulgence of teenage fantasies encapsulated by Mattel’s new “Quinceañera Barbie” and Disneyland’s quinceañera packages and competitions. This Never Neverland element has certainly permeated La Paz, with fairies perching atop garish pink cakes and Disney princesses adorning the quinceañera velas. For the more fashion-conscious, trend-obsessed fifteen year old, Emo-style gowns have been rushed in from Argentina, ensuring that a Quinceañera needn’t abandon her usual urban outfit of biker boots and black capes. In brief, every shopkeeper that I interviewed emphasised that it is the Quinceañera who personalises the party; the parents merely pick up the bill.

Nevertheless, despite this apparent wave of diva-esque daughters and opulent, superficial banquets, it is perhaps encouraging that young women are encouraged to take responsibility for their own event, as it can only further their sense of independence and self-esteem, essential traits for the modern woman. A 21st century quinceañera does not aim to launch girls into a life of domesticity or marriage, as was the original purpose of the celebration; instead it reinforces a teenage girl’s confidence, inspiring her to chase her own dreams instead of simply living up to family or social expectations.

Over the course of this month, I have definitely watched too many home videos of quinceañera celebrations on YouTube. Some are highly impressive and entertaining in their display of pomp and ostentation; however, it soon emerges that even the most MTV-style fiesta has not lost the gravity or meaning of a coming-of-age rite. It is not the expansive guest-lists or generous gifts that bring a tear to the Quinceañera’s eye; it is the pride of her parents and her first dance as a woman with her father.