MORNING ON A MINIBUS 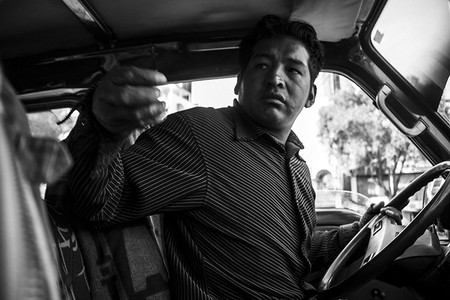 La Paz is due for a huge change in how its citizens commute. Finn Jubak tags along on a venerable mode of transportation that might soon be a relic of bygone days.

I stood in front of the Iglesia San Francisco at 5 am on a Thursday morning and watched La Paz wake up. Cholitas emerged from side streets carrying baskets of goods to be sold around the perimeter of the plaza as the avenue began to fill. The minibuses, though, had already been running for over an hour. Plaza San Francisco is a major hub for minibus travel, especially early in the morning when workers begin their commute between El Alto and La Paz.

I climbed into my first minibus of the day at 5:15 am, headed for La Ceja (‘the Eyebrow’), in El Alto. Because this is the beginning of a long-distance route along the highway, with minimal stops along the way, the driver waited until it was full before departing. Buses can fit 14 seated passengers, and sometimes a few standing. I sat in the second row from the back, watching the voceador, an assistant to the driver whose job is to advertise the route by yelling it over and over again. Minibus drivers do not always employ voceadores , who, I was told, can cost around 70 bolivianos a day, but they are common on these routes.

The trip from the Plaza San Francisco to La Ceja along the autopista is roughly 13 kilometers long and takes about 20 minutes. The ride was very quiet—no one said a word. This was partially because of the hour, but also because of the convention that most people do not talk on the minibus. Music constantly seeps from the radio and transforms what could be an uncomfortable silence into a peaceful and meditative one. I was experiencing the famous discomfort that is a mark of this method of transport, especially for a tall foreigner, so I let my legs fall asleep as I daydreamed along with my fellow passengers.

When the bus stopped at La Ceja, our voceador opened the door and let us out. On these long routes, there is almost no interaction between the passengers and the driver, with the voceador running the operation—collecting fares, giving directions. I tried to thank the driver anyway; I don’t know if he heard me. I did not notice any other passenger say anything. It was still dark out as I looked for a bus to Rio Seco. La Ceja was quite busy, mostly with people heading in the opposite direction I was going: those who live in El Alto but commute to work in La Paz.

Finding a bus to Rio Seco was not hard. My driver had no voceador, instead attempting to attract passengers by calling out through the passenger-side window. We drove down the Avenida Juan Pablo II, pausing every 15 seconds as the traffic slowed. Rio Seco is a major destination for buses coming in from the surrounding provinces, and at this hour was already packed with buses large and small.

After my trip to Rio Seco, I caught a bus back down to Villa Fatima, all the way across town, on the far north side of La Paz. On such a long ride, it was easy to see why minibus travel is inefficient: constant stops across the city can add up to hours spent loading and unloading passengers. From Villa Fatima, I took a bus travelling to Kalahuira, the furthest the city buses travel in the direction of Los Yungas to the north. Our driver, who travels back and forth along the steep and potholed road between Kalahuira and La Paz, told us that the busiest time of day for him was around 4 am. That is when provincial transport drops off people from Los Yungas who are looking to travel into the city. In order to maximize profit, drivers along routes like this have to be out and working by the early morning.

During the hours I spent riding buses back and forth across La Paz, the organization and efficiency of the transport system stood out as abundantly evident problems. I also wondered at the difficulty of making a living in this job. Drivers charge 1 to 2 bolivianos per ride. Subtract the money they pay their voceador (if they have one), around 40 bolivianos for food, and as much as 180 for gas, and not much is left. Work starts before dawn and ends as late as 9 at night. It is demanding schedule, dictated by the necessity of earning as much money as possible. The same need to attract more passengers causes the inefficiency of the system itself, with unbearably frequent stops and long waits at the beginning and ends of routes. Combined with the pure discomfort of travelling inside these small vehicles, this contributes to their unpopularity—ask anyone on the street, and they will say that they cannot wait for the new Puma Katari buses to arrive in the autunum, which will provide an alternative but likely won’t end up replacing the minibuses completely.

This is the paradox of the minibus system: despite all its flaws, it is still vital to the citizens that constantly complain about it. Without the minibuses, the city would grind to a halt; most paceños would have no way of getting around. But because of them, the city is choking with traffic, and it is nearly impossible to get around anyway.

Maybe it’s because I am a romantic, or because I have not been forced to cram inside them my whole life, but I find myself saddened that the minibus era may well soon be over. The intimacy they create is different from anything I have experienced on public transport back home in New York City, where it is unusual to even acknowledge fellow passengers. And, cramped as they are, they are almost cozy. When I remember my ride at 5 in the morning up to La Ceja, I remember the warmth of the bus and the comforting presence of my fellow passengers so close by, sharing my experience as we ambled up the hill to El Alto.