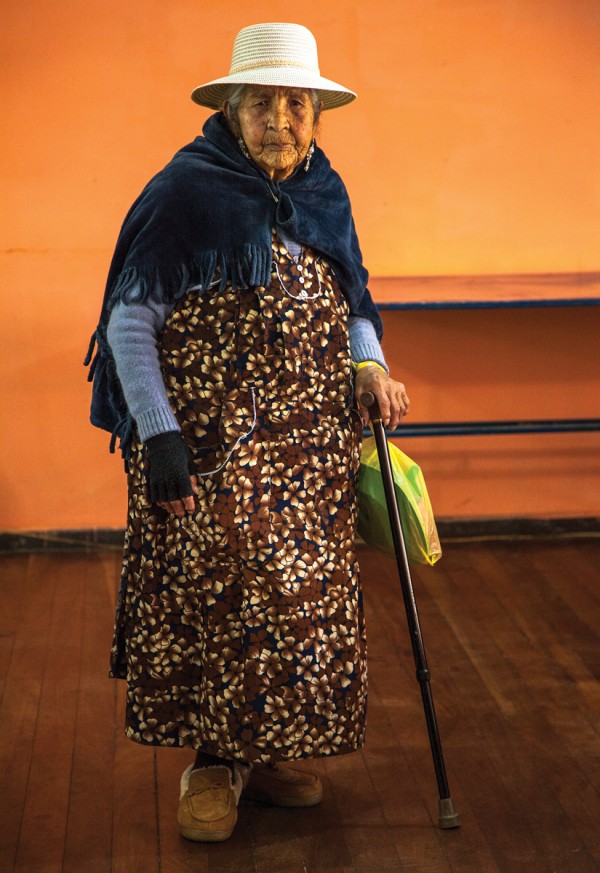 Growing Old with Grace (and Dignity, Respect, Support and Freedoms)

What does it mean to “be old”? For “La Reina” of the Maria Esther Quevedo Care Home, otherwise known as Alicia Abigal Flores Burgoa, it simply signifies advanced age, a point at which all will arrive in their lives. She associates the word largely with pain and incapacity, confessing her fear of being unable to look after herself, as she witnesses day to day peers who need help with simple tasks such as washing, dressing and eating.

I am speaking to Alicia at her care home, nestled at the end of Calle Jaén, a beautifully preserved colonial street in La Paz near Plaza Murillo. Today, the centre has planned a variety of activities to commemorate the Day of Dignity for the Elderly. Every 26th of August in Bolivia is a day to celebrate the elderly and promote their right to live respectably.

This year, the day’s activities included a marathon for the elderly and a fair on Plaza San Francisco named “Recuperating traditions of days gone by”, along with a llajua cooking competition.

When I met “La Reina”, she was dressed in a grey pollera, a beige shawl with flowers, and a sombrero de cholita marked with a pink sequined crown. She had been elected Queen for the day and people were showering her with pink flower petals as she sat alongside her “Amigos Predilectos”, a select group of residents who were being honored. However, “El Rey,” who had also been elected, was nowhere to be found during the party. Upon asking Alicia of his whereabouts, she tells me, ‘My King died 30 years ago.’

Many residents at the home have lost spouses and other family members. The centre cares for elderly people who are poor, homeless and without family, due to loss, abuse or abandon. During my visit, I met a man who asked me, while weeping, if I could help him find his son before he passes away. He was placed in the home by his son more than 12 years ago and has not been visited since.

There are different programs at the Quevedo care home that aim to improve the lifestyle of the residents and redefine the social “label” of old age. One such program is called, “Adoptando un Abuelito”, which invites volunteer families to spend time with the residents. Another is called, “Abuelo, Cuéntame” and consists of a video competition in which the elderly share life stories on camera. This last initiative not only aims to recuperate the city’s memory but also to encourage empathy toward the elderly and boost their self-esteem, helping them feel connected to surrounding communities.

Indeed, these “grandmother stories” enable us to learn and grow through the experiences of others. Alicia is 86 years-old and will turn 87 this month. ‘Jovencita’ I say, in a joking manner. Then I ask, ‘What advice would you give to someone who is 21, like me?’. ‘That you respect yourself, that you don´t lie. That you are assertive and that you don’t accept bad things, otherwise people will take advantage of you,’ she responds. ‘If you respect yourself, others will respect you and become fond of you’.

This, she says, is important to gain many friends in life, who will support you. These are the friends that visit her regularly at the home. Her main source of happiness. ‘You need to plant the seed to reap the harvest,’ she points out, meaning you only get back what you’ve given in life.

The elderly may be frail, they may look impaired and increasingly unable to physically achieve what they want to. But, in this image-centric world,  let us not forget that there is more to an individual than what is visible on the surface. Inside an ageing body is wisdom, knowledge and experience that we can all learn and grow from.