In the Arms of the Moon Goddess 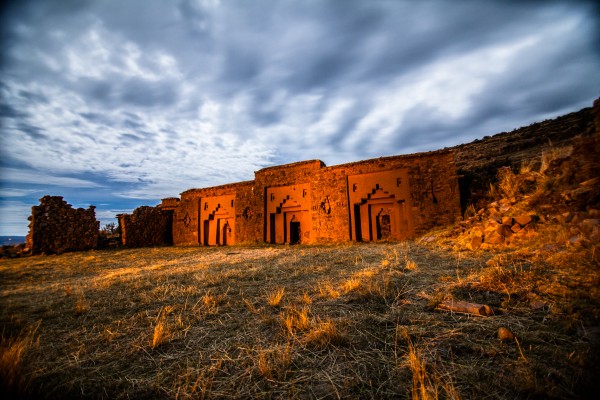 The elderly Aymaran woman runs about the circle with almost supernatural vigour, touching each of our bowed heads with the wrapped sacrifice. She whispers a breathless incantation, and all I hear is one word feverishly repeated: Pachamama. She places the bundle upon the central fire – it goes up in flames with a roar. The orange glow flickers upon the ruined temple walls, casting strange and fearsome images with its light. Carlos tugs at my arm. ‘It’s a good sign when it burns so quickly,’ he intones. ‘Pachamama will be pleased with the sacrifice.’

We rise, hand in hand, and begin to dance to a piping flute in a circle around the fire. The flames lick higher and the moon above breaks free from the lightning-streaked storm clouds, bathing the whole spectacle, the entire Isla de la Luna, in white light. The light of Mama Killa descends to the earth below, infusing the ceremony with her divine power. It is a good night to offer a sacrifice to the Earth Mother. Pachamama will be pleased.

La Isla de la Luna (the Island of the Moon), in the heart of Lake Titicaca, has been a place attuned with the spiritual world for millennia. On its eastern shore stands Inak Uyu – the Temple of the Virgins. This was a place of Moon-worship and a convent for Inca women before they were married off to local lords. But the significance of this temple and its relationship with the Moon precedes the Inca, dating back to and beyond the pre-Inca empire of Tiahuanaco. All that remains are three Cyclopean façades punctuated with the trapezoidal doors of iconic Inca design. I had been sceptical of the divine energy that allegedly infused the island when I arrived, and especially skeptical of the power contained in moonlight. But after a night in the temple ruins I question no more.

La Isla de la Luna signifies different things to different people. Many visit the island seeking a spiritual awakening. These people have detected an antediluvian power within the land and have transformed the island into a conduit for New Age ceremonies. One such person is Samai, a Chilean woman living in La Paz who feels an affinity with the island and the light of the Moon upon it. She speaks with me in her Zona Sur apartment about the revelation she had within the temple a decade ago, and how it informs her spiritual movement. She was transported back in time to the era of the Inca. Here she trained with the virgins of the island in their esoteric art – though she believes they were not simply virgins kept for Inca nobility but priestesses who drew their power from the light of the Moon. The empowering connection between women and the Moon has been recorded throughout antiquity, and through ceremony and ritual Samai leads a group of all-female Moon-worshippers, combining the traditions of the local Aymara and Inca with the occult practises of cultures from across the world. It is her goal to promote female empowerment and positive thinking, and to facilitate a spiritual revolution that encourages an end to patriarchal religion and politics and a return to nature. For her the island is a place of magic that assists in these ceremonies.

After my arrival at the island I trek over the Inca terraces and track down Don Felix and his brother Porfirio – the men are community leaders for the island’s 25 families, working tirelessly to promote tourism for their sandy sliver of land. For them the entire island is sacred. On the Isla de la Luna the ways of the old gods still hold sway, and the Sun and Moon are deities with considerable power over human lives. The islanders frequently perform sacrifices to ensure healthy crops and prosperity. The light of the Moon is important here for the whole island, her luminous powers extending to men and even agriculture. Felix explains that the site of Inak Uyu is most important for the community as a spiritual place, but they do not mind tourists visiting the sacred site. For the delicate island economy, tourism forms a financial staple.

The strange contract between spirituality and tourism at Inak Uyu was made starkly prescient on my first night on the island. A field trip of students from the Universidad de Aquino Bolivia arrived to take part in a ritual sacrifice. As they were led through the dusk to the temple they understood they were watching a ritual put on for them – but many believed the ceremony itself still contained great power. The Aymaran woman was preparing a mesa for Pachamama. Sheet-lightning lit the hills but we heard no thunder as Mama Killa soared overhead, illuminating the temple as brightly as if it were day. Amidst the coca leaves of the mesa were placed tokens of sacred significance – clay images of llamas, currency, and houses representing good luck, wealth, and future salubrious accommodation – and the students laughed and joked with each other casually. But apprehension hung over the assembly too. Carlos approached me and quietly enquired if I believed in what was happening. I asked him if he did. 'I am a student of tourism’, he said. I am here to watch the ritual as part of that. But of course I believe in the ceremony.'

For many students this was more than a school trip – this sacrifice was spiritually very real. The mesa was an offering to the gods and a blessing for those gathered. I was invited into the circle and ceased to be a spectator, becoming part of the ceremony. I chanted when they did, I followed when they danced, and under the light of the Moon I paid homage to Pachamama. Carlos was my translator. He explained it was very auspicious that the sacrifice was taking place under moonlight. Pachamama may be a goddess but she is still a woman, and as such the rays of Mama Killa made the offering all the more powerful. The flames of the fire leapt high and the dancing circle tired, the melancholy flute dying away. We all gave thanks and chanted 'Pachamama Jallalla!' once more, and the ceremony concluded.

Whether a tool for tourism or an outlet of the occult, there is definitely something infused in the ruins of the Inca temple – something that only becomes manifest when the Moon holds the island in her luminous arms.