If It Cures, It Cures 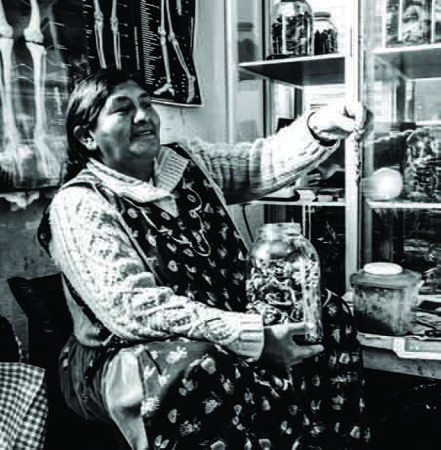 Sophia Howe meets some of Bolivia’s traditional medicine practitioners, some of whom only use natural herbs and ancestral knowledge; others decidedly more exotic in their practices and ingredients.

Natural healer Doña Andrea de Choque lives on a steep hillside road tucked among the busy streets of El Alto. She’s known throughout South America, and attracts lawyers and businessmen who seek her healing powers, along with local working-class people.

Descended from a long lineage of healers, Doña Andrea gained an interest in the field when clients of her father’s, who was a healer himself, came looking for him after he died. Sixteen years later, clients from as far away as Chile and Argentina come in search of her at her consultation room in El Alto, perched on a set of steps in El Alto overlooking the vast views of La Paz.

Having never studied at university, Doña Andrea claims that ‘it is only through personal interest that you can learn the knowledge of curing’. Her son is now following in her family’s legacy, and she teaches him all she knows about the importance of natural herbs and dried lizards.

When waiting for Doña Andrea, a customer comes in seeking advice for a broken finger. She provides him with a bag of parche natural and a jar of alcohol, advising him to put the paste around the bone, supporting it with cardboard and clothes, using them as a makeshift cast. ‘Even with very serious injuries, people come here first for a parche’, she says. Doña Andrea also claims that even when her patients go to hospital to be operated on, they return to her as part of the healing process.

‘If it cures, it cures’, she says, explaining a pragmatic and seemingly untheoretical approach to healing. Doña Andrea, who is renowned for her bold and strong character, has scared off some potential clients. But when even some modern-medicine doctors recommend her treatments, it’s hard to stay away. Upon first meeting Doña Andrea, her secretiveness was intimidating, but she soon opened up when I asked her about her most popular remedy, her ‘pomadas de lagarto’.

Live lizards and snakes from the countryside are jammed inside jars and and soaked in alcohol, which slowly dessicates them. This lizard-essence-infused alcohol is used to cure fractures, dislocations and broken bones. Doña Andrea requests other natural herbs from campesinos in the Yungas and the altiplano to make the parche natural.

Belying Doña Andrea’s hard exterior, her ointments are made accessible to all clients, rich or poor. They range the gamut from famous footballers and lawyers to the homeless, who may only be able to afford five bolivianos instead of the normal charge of ten.

Posing for a photo outside her consultation room, Doña Andrea whispers under her breath, ‘does my bum look big in this?’ It’s in phrases like these that one wonders whether she’s just as normal as the next person, with a heart open to anyone who needs a healing hand.

To be a Kallawaya—a traditional healer, whose secrets are passed down through familial lineages—is a very respectable profession. But what if the next generation doesn’t have that same interest to carry on these traditional cures?

A Kallawaya’s secret knowledge is transmitted from father to son, whose destiny it is to follow in his father’s footsteps. Nowadays, though, there are more choices for young men, and some have elected to abandon their family traditions.

The Bautista Saavedra province in La Paz and, within it, the village of Curva, are home to a large Kallawaya community, from which Grover Quispe Tejerina and Quina Victor Castro originate. These two healers have offices on the busy Calle Sagarnaga, in the historic central district of La Paz, from where they offer their healing powers to ameliorate such conditions as ‘frightened souls’, and sometimes just to educate inquisitive tourists.

Quina Victor Castro left Curva fifty years ago to come to La Paz. He learned all he had to know from his uncle Luciano. Still clinging on to all his knowledge, he shows me the small notebook that belonged to his mentor. ‘This is my Bible’, he says.

All herbs used by Victor are dried in the shade, as it is not effective to dry them in the sun outside. ‘I have to sell something good and effective’, he says. ‘The sun’s rays destroy their healing properties.

Herbs like willia and achumani are used to calm temperatures, and sillu sillu, flor de Santa Maria, and crema de palpalambran are used to help cure the pains of menstruation. They are all cultivated in Curva, from where they are supplied to all authentic Kallawayas working in the city.

Grover Quispe Tejerina explains how he reads coca leaves to determine how a patient’s operation will go. If he reads anything bad, he tells his clients and they don’t go to the hospital. ‘Doctors send people to surgery for anything’, he says. ‘I decide to treat them or refer them to a naturalist doctor’. He’s confident that his healing works, saying that all of his clients are cured, adding, ‘to believe is part of the treatment’.

The Kallawaya tells me a story that seems to prove the efficacy of his natural healing method: a heavily constipated French tourist had no relief for a year. After doctors failed to fix his unfortunate problem, he decided to seek out the Kallawaya community in the Bautista Saavedra province, ultimately consulting Grover Quispe Tejerina. ‘With one herb the man was cured’.

The bustling corners along Calle Sagarnaga reveal all varieties of traditional and cultural medicine used by locals and curious tourists alike.

After attempting to chat with many unwilling shop owners, Natalia, a yatiri, dressed in a floral pinny and Ugg slippers, welcomed me into her shop on Esquina Jimenez, which has been owned by her family for generations.

Yatiri literally means ‘a person who knows’. Legend has it that one can become a yatiri by being struck by lightning, but, more frequently, yatiri healing knowledge is learned through training by one’s family.

Natalia is expansive when she speaks about her profession, explaining clearly what she does. She is, however, apprehensive about meeting clients at their homes, preferring instead to sell her remedies from her shop. They are taken as an infusion, costing a mere two bolivianos per ingredient.

Inside her shop, decorated with colourful packages and sweets, are thousands of medicines used to cure cancer, kidney problems, diabetes, vascular disease and depression. The rainbow of colours alone is enough to lift anyone’s spirits.

Specialising in curing illnesses and cleansing spirits, yatiris also prepare mesas positivas—a sort of spiritual altar, or table, sometimes in the shape of a frog, for good luck—which, depending how they are prepared, can bring good health or curses. ‘The table doesn’t cure you physically, it cures your spirits’, Natalia says.

She uses llama foetuses with white flowers on the mesas positivas. Llamas are considered sacred animals and have a strong spiritual power, and they can be used to prevent sickness throughout a whole town. In another, darker, ceremony, the blood of a black dog is splashed across a different kind of mesa, to place a curse on those who haven’t paid their debts or have been unfaithful. These mesas negras are used to compel the afflicted to improve their ways.

Natalia took me through a puertita to show me her secret ingredients: dried starfish, ostrich feathers and eggs, a stuffed cat, dried glittery frogs, sea urchins, coloured mushrooms, shells and coral, bones and numerous herbs drying in the shade, were laid in front of me in this yatiri’s warehouse.

These traditional healing methods have not been tested extensively in clinical trials, although several of them have been used in the region for over a millennium. Natalia, however, says that Bolivian people place much more trust in natural medicine, and its use is on the rise. In fact, it’s not uncommon, she says, for physicians trained in modern medicine to refer clients to her.

With such assorted miracle treatments such as uña de gato for cancer, it’s surprising that more tourists have not yet sought out this alternative method of healing. Some do, says, Natalia, but ‘they don’t yet believe the wonders of these indigenous findings. They come in purely by curiosity, and rarely to look for a cure for cancer’.