Getting to the Heart of It 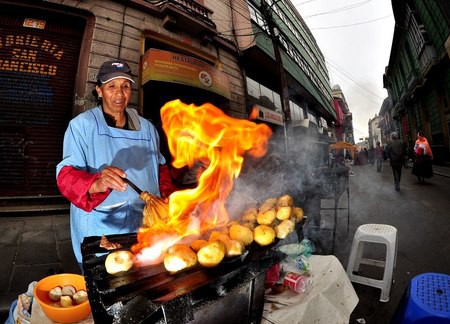 It was late one evening, possibly early in the morning, and I had one single mission: to find some sustenance in order to make bearable the walk to our next destination. As I made my way slowly across Plaza San Pedro, staring up at the daunting façade of the infamous prison, I spotted a flame shooting up on the far corner of the plaza. Moments later, the wind shifted and the telltale fragrance of anticuchos wafted around us.

The smell, just as much of a part of La Paz at night as orange-tinted street lamps and lonely taxis prowling for fares, was intoxicating. Compelled by the aroma and the sight of the slow-burning charcoal and well-marinated meat, I was instantly drawn towards the flame that I had glimpsed moments earlier. The next thing I knew I was holding up my peanut-sauce-covered finger to ask for one more plate of sliced and skewered cow heart, even before I had finished my first portion. As I shoveled yet another plate of anticuchos into my mouth, I began to marvel at the simplicity of this tiny establishment—just one elderly woman, a grill, a small stack of plates, and a bucket full of glistening red, thinly sliced cow hearts. I also marvelled at how anticuchos are still as popular today as they have been in their 500-year history. I realized then that there is more of a connection between anticuchos and love than just the literal ‘heart equals love’ relationship that exists in much of the world. There is the love for the anticuchos themselves, a love that virtually all Bolivians will admit exists somewhere in their own hearts. But even more, theirs is a love for what this dish represents. It is uniquely Andean, and for many people, they are an integral paceña tradition.

Anticuchos have been a popular Andean dish since the sixteenth century, in both Peru and Bolivia. They are made up of thinly sliced pieces of cow heart, which are grilled on skewers, and served with potatoes along with a spicy peanut sauce with ají. A short walk around La Paz at night reveals the dish’s enduring popularity—lone women sitting behind grills, on just a few square feet of the sidewalk, set up when the sun goes down, enticing drinkers and late-night revelers with their sizzling and fragrant combination of meat and potatoes. While there are myriad of street-food alternatives throughout the city, anticuchos are brimming with history and cultural significance. Some historians believe the origin of the word ‘anticucho’ comes from the quechua ‘antikuchu’ (where ‘anti’ means Andes and ‘kuchu’ means cut, or alternatively ‘uchu’, which means hot paste). It is said that this dish was brought over from Africa by slaves during the colonial period, and was combined with local and imported ingredients, such as garlic which was brought from Europe by the Spanish conquistadors. The dish responds to the necessity of using unpopular cuts which are otherwise unpalatable or hard to eat, such as heart. As I started to learn at El Alto Market, it’s telling this dish comes from a culture where nothing goes to waste.

The best anticucho that I tasted came from that anticuchera near Plaza San Pedro. She consistently produced the highest-quality anticuchos I could find—moist, succulent meat, cooked perfectly, tender and topped with a hearty amount of peanut ají. I returned frequently throughout the following week, and each time I found myself eating more than I thought I would. The meat was perfectly chewy, delicious but not overpowering. The potatoes, always perfectly cooked, warm and soft—and never too small—soaked up the meat juice and the all-important peanut ají.

Anticuchos normally cost around six bolivianos per serving—less than a US dollar. With such cheap prices, one might think that the typical anticuchera is an unskilled laborer. But the women who make this dish are true experts of their craft. Possibly the only thing better than actually eating anticuchos is watching how they are made: the anticucheras deftly maneuver the thin slices of meat around, simultaneously making sure the potatoes don’t burn and the fire keeps going. And don’t attempt these at home, readers. By all local accounts, there is no such thing as a good homemade anticucho. They say the secret is in the sauce, which no anticuchera was prepared to share with me.

But while the anticucheras normally present a great night-time meal, not all anticucheras are equal. Because they are often part and parcel of a drunken night out, some anticucheras don’t depend on skill to sell their platters, they depend on the drunkenness of of their customers, who might not notice if the meat is overcooked or a little off (I’m looking at you, anticuchera who sets up in front of the club Forum in Sopocachi).

Anticuchos are less of an actual meal and more of an experience: the smell that is instantly recognizable a block away, the quiet expertise of the anticucheras, the sizzle of the meat as the flames gently wrap around them. In the end, it is this experience that outweighs everything. Standing in the dim light of La Paz at night, eating off a plastic-wrapped plate and licking your fingers for extra peanut sauce—it’s all as important as the actual food.