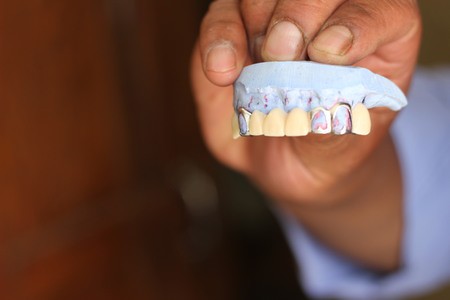 Cholita fashion is certainly eye catching, thanks to their sequined shawls, multi-layered polleras and distinctive bowler hats. However, once you get talking to many cholitas you may notice a special something in their uniquely radiant smiles - their teeth are crowned and adorned with all manner of metallic ornaments. Curious to learn more, I set out to investigate, visiting several dental practices across La Paz’s Zona Norte and El Alto.

After speaking with several dentists, it became obvious that there is a great variety both in the design and appearance of this dental work, with prices to suit all budgets. Someone with a slender wallet may only spend something like Bs. 300, and have just one or two acrylic/porcelain teeth implanted and then covered in chrome or silver. A cholita looking to splash out may spend upwards of Bs. 3000 to fill their mouths with gold and platinum crowns.

Gold is certainly the classic choice, and despite being the least durable and most expensive option available, it continues to enjoy great popularity. A dentist told me “Typically women ask for heart-shaped design, whereas men want something more rectangular”.

Back home in the UK, metallic mouths are more often associated with rappers such as Goldie and Juvenile. I somewhat doubt that rap artists and cholitas have too much in common, yet when it comes to this goudy oral fashion, it’s not unthinkable they have similar motives. From grillz to heart-shaped tooth-jewelry, this phenomenon is the lovechild of relative wealth, ostentatiousness, and pride. Indeed, I am told it is often monied carniceras and prominent merchants who can afford the most extravagant smiles.

Despite the fact that they are ever so proud, very few are willing brandish these beauties for the camera. This was certainly apparent after every single cholita in sight rejected our request for a photograph. We came to realise that the only way of seeing these teeth in all their glory was to engage them in conversation, or even better, make them laugh out loud. Like every well-established fashion, there are slow but constantly evolving innovations in the world of golden smiles. A notable change has been the introduction of economical and durable materials such as chrome, which is said to be the most comfortable when eating. Yet despite the seemingly burgeoning industry created around this cosmetic procedure, Dr. Israel Quispe tells us this fashion has seen its day, and that many of his customers who had this done a decade or two ago are now requesting the removal of these teeth, reverting to a somewhat more natural look.

These smiles can also be more expensive than first meets the eye. Dr Quispe also told us of a rather harrowing story of people with gold teeth in El Alto who had been victims of violent attacks: thieves had smashed their teeth out with stones just to steal the gold which, I should add, rarely even adds up to gram. There are certainly moments when you pay the full price of having an expensive smile.