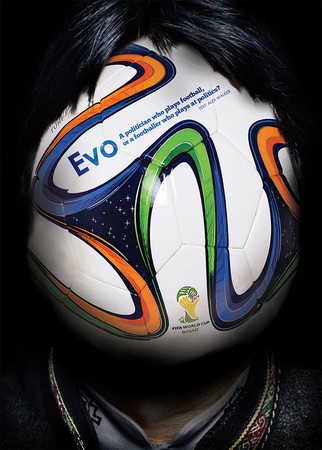 A politician who plays football, or a footballer who plays at politics?

In 2010, a bitterly-fought charity match was played between two teams, one of them led by Bolivian President Evo Morales and the other by La Paz Mayor Luis Revilla—a man whose MSM party had recently joined sides with Morales’s opposition. A now-infamous video shows Morales kneeing defender and political opponent Daniel Gustavo Cartagena in the groin. Although the subsequent attempted arrest of Cartagena at the hands of Morales’s security team was thwarted by Revilla, it seems that the president was the only party to get off scot-free.

According to former Bolivian president and football fanatic Carlos Mesa, Evo Morales ‘doesn’t necessarily represent who Bolivians aspire to be, but who they really are’. Indeed, he is an indigenous man, without hardly any formal qualifications, who has become leader of the nation.

Evo’s political career has been constructed around the ‘everyman’ image and football is, perhaps, the most central aspect of this allure. Take his recent contract to play professionally with the Montero–based ‘Sport Boys’ next season. Despite the insistence of their chief, Mario Cronenbold, that Morales ‘has a great right foot and dominates the ball’, nobody is under the illusion that the president has earned his contract through footballing merit alone. The question that remains, then, is whether this is a purely political ploy. Although sociologist Mario Murillo believes that it is a move motivated purely by Morales’ love of the beautiful game, Club Bolívar president Guido Loayza disagrees, explaining that ‘for people in politics, any act is a political act’. While his decision to play in Santa Cruz, the city which his government has most struggled to win over, could be seen as a populist masterstroke, Carlos Mesa believes that by doing so he will be ‘forcing an absurdity’. This, however, is not what the former president finds most disturbing about his successor’s move. Indeed, Mesa describes this foray into professional football as demonstrating ‘a lack of respect for the league, for the fans and for young players who are trying to break through’.

Morales is certainly not unique in mixing politics and sport. Indeed, North Korea’s deceased leader Kim Jong-il’s biography boasts that in his first-ever round of golf, he achieved 11 holes-in-one, carding a dubious 36 under-par. Closer to Morales, though, is Silvio Berlusconi—a man with very different politics but with a similar populist image—who conjured up a party from thin air based on demagogic policies with the buzzword name ‘Forza Italia’, the slogan of his own football team, AC Milan. His connection with football is far more than surface deep, however. Perhaps the strongest illustration of Berlusconi’s footballing mind-set can be found in his use of language: for example, on his victory over fascist and communist opposition, Berlusconi said, ‘I heard that the game was getting dangerous, and that it was all being played in the two penalty areas, with the midfield being left desolately empty . . . and so we decided that we had to fill that immense space’.

Mario Murillo says that Morales, too, views the world of politics through a footballing frame of mind. He explains that, when Bolivia hosts political summits, the President refers to his government as the ‘home team’ and that he often uses attack-vs.-defence analogies when constructing political strategies. Carlos Mesa remarks that Morales ‘can’t spend a week without playing a football match’, and you need only flick through a few pages of a Morales biography to understand that football is ingrained in the president’s DNA.

Aged 13, Evo set up a community football team called Fraternity, captained—as you might expect—by himself. Within two years, Morales had been elected as the training coach for a team in Oruro: ‘I was like the team owner’, he said. ‘I had to shear sheep and llama wool . . . we sold the wool to buy balls and uniforms’. In the ’80s, drought forced his family to move to the Chapare region, where Morales used football to integrate into his new community: ‘One day, I played with the settlers and I scored the winning goal’, he reflected, ‘then everyone wanted me to play with them’. Later, as Sports Secretary for the region’s cocaleros trade union, Morales organised football tournaments and, in 1985, was appointed Secretary General, leading six separate cocalero federations and getting elected deputy of the union just two years later.

Morales, as president, is no stranger to using football as a political instrument. For instance, when playing in a match at 6,000 metres to protest the efforts to ban Bolivia from international fixtures at high altitude, the president used the situation to act as unifier and enhance his reputation—something encapsulated by his statement, ‘If love can be made, football can be played’. Referring to this political strategy, Eduardo Gamarra, a Bolivian political scientist at Florida International University, declared that ‘FIFA have done Evo a big favour’. Similarly, in September last year, Morales and several UN officials took time out from the General Assembly to play a football match to raise awareness of a UN campaign against domestic violence. Heraldo Muñoz, Chilean Minister for Foreign Affairs, describes football as ‘a global passion and a great way to win hearts and minds’, and Morales has proven adept at using it as a means to an end.

In times of political difficulty, Morales has also used football as a deflection tactic. In April 2010, for example, just a day after he controversially warned Bolivian males to eschew chicken because it caused baldness and decreased virility, the president organised a football match between representatives from all over South America in the mountain village of Colomi — arguably succeeding in diverting public attention away from his statement. Perhaps more puzzling, though, is the fact that his administration has been accused of building canchas in areas of political opposition to pull wool over the eyes of his critics. Ironically, while a blatant populist act, there is no doubt that this ploy will directly contribute to the development of grassroots football in Bolivia. Carlos Mesa believes that ‘without a single doubt’ Morales has improved the state of the game in Bolivia in two main respects: Morales has established football as a part of the quotidian Bolivian culture, and he has inculcated the idea that ‘football can be played in any place at any time’.

Carlos Mesa explains that he ‘couldn’t have gotten away with half the things that Evo does because there are certain things that the public expect of their current leader’. Morales, then, has built a political career on a populist image centred around football. Like the man who built his house upon the sand, having constructed a political career on footballing foundations, you would assume that it is only a matter of time before Morales’s luck runs out. Indeed, David Goldblatt, author of Futebol Nation: A Footballing History of Brazil, believes ‘as widespread protests in [Brazil] in the past year have shown, the public is too educated, too organised and too cynical to accept the tropes of the past—that football and glory are a plausible substitute for health-care and good government’.

Morales, though, is not offering football as a substitute. For him, politics and football are one and the same. While his decision to play professional football next year does not exactly send out a message of total commitment to his presidential duties, it is difficult to disagree with the idea that, in many key respects, Evo Morales has been a good president. Rather, Morales has so effectively conflated politics and football that both have become inseparable from the man himself.