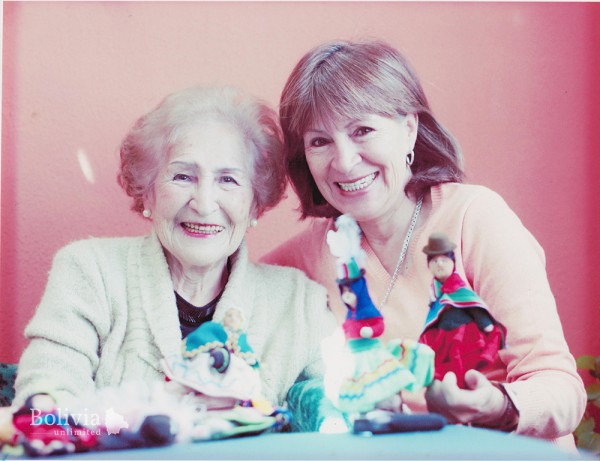 Tucked away in Sopocachi, La Paz, the Museo de las Muñecas (Doll Museum) is a unique and curious museum that’s much more than a collection of children’s toys. It was founded in 2009 by Elsa Paredes de Salazar and her daughter Roxana Salazar in their old family home. The museum was a dream come true for Elsa, who had been collecting dolls her whole life.

Roxana described how her mother ‘liked dolls, but it was the traditional dress, the typical clothing, the people from different regions, different countries, different cultures that really grabbed her attention.’ For Elsa, these dolls served an almost anthropological purpose because they were representations of how people dressed. The collection upstairs, which is spread over two relatively small rooms, is filled with dolls that represent every corner of the globe. The first room explores the vast history and tradition of Bolivian dress, in particular what’s worn for different dances and celebrations. These were Elsa’s favourites because, as Roxana described, she ‘really loved the clothing of the Bolivian dolls.’ Elsa even took a course and learnt how to make the doll costumes herself. The dolls have beautiful and intricate outfits which are worn for dances such as the diablada, a dance between the Archangel Michael and Lucifer that represents the triumph of good over evil. More everyday Bolivian dress is also represented, such as what’s traditionally worn by cholitas – a full skirt, colourful shawl and high bowler hat. The collection gives visitors insight into the vast and rich history of Bolivian clothing, something they’d be hard-pushed to find in such detail in one place anywhere else in La Paz.

The collection gives visitors insight into the vast and rich history of Bolivian clothing.

The collection then moves on to other American countries. Traditional and colourful clothing from Argentina to Mexico is represented in great detail and precision. It’s quite beautiful to see both the similarities and the differences between the dolls’ clothing on display. After the Americas the collection heads to Europe, with everything from Spanish flamenco dancers to Scottish kilt wearers. Then finally on to Asia and Oceania. The whole collection demonstrates how much a nation’s identity is tied up in its clothing, and visitors will easily recognise which country each doll represents even before reading the description.

Elsa’s passion for dolls was described by Roxana as something inherent within her, which materialised when her godmother gifted her one small porcelain doll and two other dolls which were, as Roxana described, ‘very indigenous in the most artisanal way.’ For Elsa, it was more than a love of playing with dolls; Roxana described how ‘in her child’s mind, more than 80 years ago, Elsa saw the differences [in the dolls], she saw the ethnic part, she saw their essence.’ This childhood fascination lead Elsa on a lifelong investigation into Bolivian folklore and ethnology. She wrote a book on the subject called Presencia de nuestro pueblo, in which she explored the history of traditional Bolivian dress and its importance as a form of identity.

Being a researcher of Bolivian folklore and ethnology was just one string on Elsa’s bow. After becoming one of the first women to attend university in Bolivia, she graduated as a dental surgeon and went on to work treating employees at one of the biggest mining companies in La Paz at the time. Her father was not enthused about her twice-monthly visits to the mines, but that never deterred her; she travelled there with her mother or sister as a chaperone, and Roxana explained how she soon started earning more than her father. This experience, along with her university education and the many female-equality movements in other countries at the time, led Elsa to become a strong advocate for female equality. Roxana remembered how her mother would say, ‘Women are equal to men; they can and they should [be treated the same].’

Elsa founded many organisations to promote female equality and also wrote two books about women: the Diccionario biográfico de la mujer boliviana, the first book of its kind, in which she highlighted and celebrated different Bolivian woman who had excelled in life, and La mujer y su época, which explored the important role of women during different historical eras. Elsa was, as Roxana described, ‘a pioneer’, and it was her commanding and imposing nature that allowed her to achieve so much. Elsa had ‘a very strong mind and always said what she thought, she always spoke directly,’ Roxana said, but everyone remembered her with ‘a lot of affection and admiration.’ Roxana also recalled how Elsa was a strict mother who always wanted the best schooling for her children, because having a good education was so important to her. Roxana explained that it was ‘one of the most important examples that [she had] taken from her.’

Roxana Salazar has continued to run the museum and uphold her mother’s, and now her family’s, legacy.

The passion that Elsa had for dolls was something that Roxana never used to share. It was only when she rediscovered her childhood dolls and felt ‘such a strong emotion’ that she began to understand her mother’s love of dolls. Since Elsa’s passing in 2013, Roxana has continued to run the museum and uphold her mother’s, and now her family’s, legacy.

In November there will be the third instalment of the ‘100 Years of Dolls’ exhibition, focusing on famous brands and wedding dolls. The museum is open Tuesday and Thursday from four until seven.