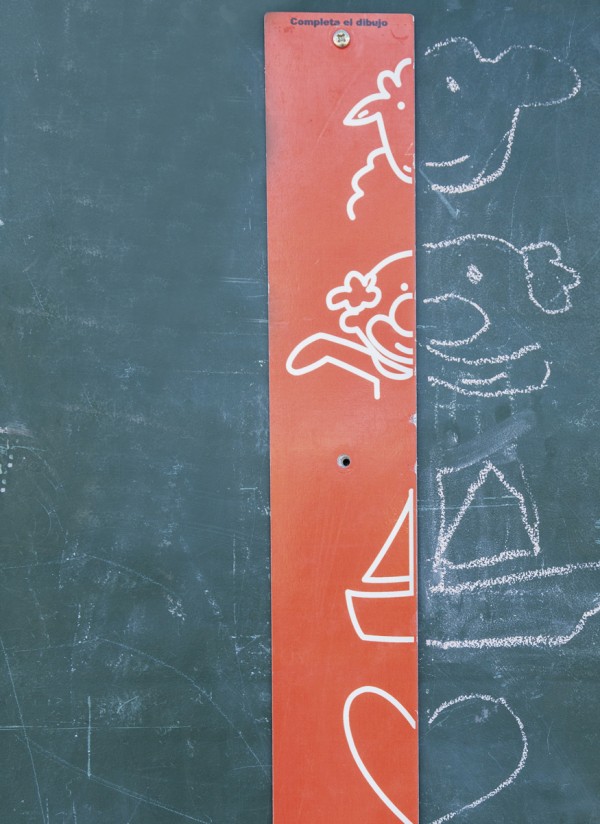 Bringing the blackboard to the streets of El Alto

I arrive at the Casa Cultural in Ciudad Satélite, a suburb on the southern edge of El Alto. It’s a shabby building that houses some of the city’s most vibrant cultural projects, including orchestra programs, a youth theatre, and breakdancing workshops. I was met by equally vibrant COMPA volunteers Anouk, Konstantin, and Lisa, who are affixing colourful laminate sheets with numbers, letters and pictures onto a large green box on wheels. This is what I have come here to see: the Mobile School.

The Escuela Móvil is quite simply a large box on wheels, whose walls can be pulled out to create a kind of mobile blackboard and space for learning. Originating in Belgium and now functioning in 38 countries worldwide, the aim is to uncover talent and self-esteem, and to empower young children, rather than replace a traditional curriculum. It is a project of the Community Foundation of Producers in Art (COMPA), established in 1989 and supported by the Fundación Munasim Kullakita. COMPA’s philosophy is simple: to provide outreach programs with an artistic and creative focus on social transformation. As we assemble the school in a square in La Ceja, a major commercial district in El Alto, and the organisers put on comic hats and clown noses, it is clear that the Escuela Móvil is no exception to the COMPA theatrical approach to community service.

As soon as the walls of the school are pulled out of the sides of the box to reveal colourful placards with letters, numbers, and games on them, an intrigued crowd of children and adults alike gather around. For many of the children, this is not their first experience with the school – the school occupies this same spot every Wednesday afternoon. Straight away, the kids are playing matching games, copying the alphabet, completing sums and watching in awe as they draw their own handprint on a chalkboard.

The main targets for the project are the children of street vendors who work in the district’s market, for many of whom the Escuela Móvil is their only contact with education. Although the market is less than a hundred metres away, many of the mothers who sell there cannot leave their stalls to take their children to the square. Gaining the trust of these women can be a difficult task, as many of the mothers are reticent to give their children permission to join in, either due to a lack of confidence in the project or valuing their children’s help on their stalls too much.

Konstantin, a COMPA volunteer from Germany who has been working with the organisation for over five months, explains how hard the project was to get off the ground at the beginning. ‘We usually go to La Ceja market and find children to join up there,’ he explains. ‘At first it didn’t work very well because the sellers didn’t have much trust in us, even though we tried to explain what we were doing in the Escuela Móvil. Now it works really well, and some of the children from the market come every week, and there are more and more each time.’ The hard work that COMPA has put in to build a relationship with these women and encourage their children to get involved with the project cannot be ignored; mothers smiled as they recognised the volunteers, who were adorned with their distinctive clown noses.

Speaking to the mother of 8-year-old old Daisy, who has been going to the Escuela Móvil regularly for four months, it was clear that the project does not only benefit the children who attend. As she fried some mouth-watering fish to sell, she said, ‘It seems really good. I enjoy the free time when she goes to the school. It also means I can sell more, and it is more enjoyable for my daughter who gets bored sitting here with me all day.’

The kids watch in awe as they draw their own handprint on a chalkboard.

Aside from the education component, giving the children an activity to do with other kids is a central part of the project’s aim. ‘They come here with so much enthusiasm,’ Konstantin says as he smiles.

The volunteers say that they have noticed a real improvement in some of the children’s abilities, especially those who were coming frequently. ‘It’s hard to see the improvement with the children that join in with the project infrequently, especially with their writing,’ says Hilma, a Finnish volunteer who has been involved in various outreach programs city-wide. ‘But I think a lot of them have gotten better at maths.’

As the afternoon moves on, the children pack up and get taken back to their mothers in the marketplace. The volunteers fold up the mobile school, collecting rogue pieces of chalk and paper cut-outs off the ground and painstakingly push the school onto the back of a pickup truck. The Escuela Móvil and its volunteers leave no trace, but it is clear that the impact they have made is significant.