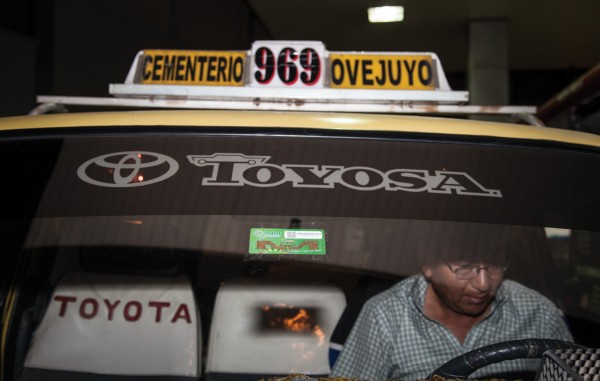 Is the government’s hi-tech fuel-tracking system worth drivers’ privacy?

At a gas station in the working-class neighborhood of San Pedro in La Paz, Diego Castro fuels up his Ford Explorer. Simultaneously, his location, purchase volume and presence on camera are being uploaded to the National Hydrocarbon Agency (ANH) headquarters.

Facilitating this is Bolivian Auto Identification System (B-SISA). Launched by the ANH in 2013 to combat fuel smuggling, B-SISA is responsible for monitoring and controlling all fuel sales in the country. ‘In Bolivia, the gas is subsidised by the government, so naturally some people will see an opportunity to sell it [illegally] in other countries,’ explains Einard Joffre, director of information and communication technologies at the ANH, who is responsible for B-SISA’s implementation.

In order for B-SISA to function, registered vehicles are required to have a green adhesive label placed on the windscreen. Within this small, inconspicuous sticker lies a radio-frequency identification (RFID) tag. When the vehicle pulls up to a gas station, the RFID antenna in the station emits a signal which brings the tag to life. The tag then identifies its vehicle to the system and the sale of fuel is authorised, while relevant data is recorded in a central database.

Unusual activity does not go unnoticed. ‘We recently identified nine different vehicles in Oruro purchasing nearly 20,000 litres in one month in different gas stations,’ Joffre says. Whether or not the purchases were legitimate is still under investigation.

One might wonder whether the Bs100 million cost of B-SISA is really justified. While recouping the costs of illegal trade of fuel alone could outweigh the program cost, Joffre explains that the system brings many other benefits to the state. ‘We work with many institutions,’ he says. ‘Because of the law it is our duty to share the information [from the system] with government ministries and the police.’

The Vehicular Theft Prevention Department (DIPROVE) is one such governmental agency that uses this information. In the simplest case, the agency is alerted if a car that has been flagged as stolen tries to purchase fuel at a gas station. Missing RFID tags or tags which do not match the exact model of the vehicle are also investigated.

It is not a bulletproof fix to car theft, as the artful criminal might avoid gas stations or completely dismantle the vehicle for parts. Nevertheless, it has the ability to significantly curtail what is realised to be the most common crime in Santa Cruz.

Another use of B-SISA is in the improvement of public bus services. In a joint effort with the the capital’s transit authority, RFID antennas are being deployed at bus terminals to track buses that have RFID tags affixed to them. With this new evaluation tool, passengers can expect more timely service. ‘This is not yet working,’ asserts Joffre, ‘but it will.’

Seeing its success in Bolivia, now other countries are interested in using the RFID tags to thwart illegal mining and logging. Peru, for instance, would track fuel sales in its Madre de Dios region in order to investigate fuel-intensive mining operations that pollute the fragile Amazonian ecosystem.

Back in San Pedro, though, Diego is not exactly sure what the point of the system is. ‘I guess the government is trying to control petrol consumption in order to prevent contraband,’ he says, ‘but I can’t tell you for certain.’

Diego believes that regulating the consumption of state-subsidised fuels is a fundamentally a good idea, but appears skeptical when asked about the government collecting drivers’ information. ‘I am sure the information could be useful,’ he says, ‘but for all I know it could be used for absolutely nothing.’

The ANH’s most expensive project is undoubtedly one Joffre feels immensely proud of. It has inspired other countries and gained global coverage. However, back home, it appears drivers have been kept in the dark. Perhaps, the ANH should be more vocal about the system if it wants drivers like Diego to share its enthusiasm.

‘I am sure the information could be useful, but for all I know it could be used for absolutely nothing.’
—Diego Castro