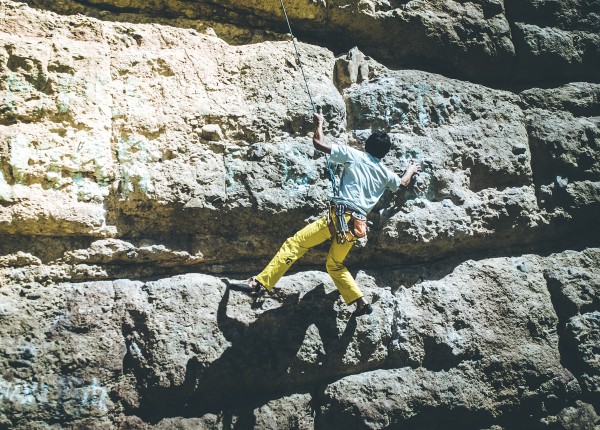 It’s a beautiful day in Aranjuez, a valley framed by high-reaching mountains that slope down into a patchwork of winding roads and dusty settlements. As I look around, I see only the slightest hints of the bustling, urban city just a few miles away. Unlike central La Paz, Aranjuez is a natural haven of calm and quiet.

A shout cuts through the air, banishing all sense of rural tranquility: ‘Push! Push with your legs!’ I am three-quarters up one of Aranjuez’s rock-faces, clinging on with a grimace. On the ground below me is Daniel Aramayo (“Dani” to his fellow climbers), who has yet to be impressed by my handling of a route he deems ‘very easy’.

Aranjuez is a popular spot for both local and foreign climbers. Thanks to the work of Dani and others like him, the rock I’m awkwardly hanging off of is studded with pitons – small metal grips which allow for a rope to be threaded through and attached to the climber, protecting them from falling. Using these fixtures in the rocks is known as sport climbing, unlike the rope-free, harness-free bouldering, which I had earlier witnessed when Dani effortlessly propelled himself up the rock-face to attach the rope that is now around my waist.

A few metres from the top of the rock, I will my legs to produce some kind of upward momentum. I glance down at a trembling left ankle and it seems clear that both lower limbs are attempting to declare independence from the rest of my body. They are uncooperative, a lifetime of moving horizontally has clearly made them complacent.

My legs’ rebellion gives me time to reflect wistfully on how, when researching sports accommodated by the mountains around the capital, I might have chosen a slightly softer option. Dani tells me that a little more than an hour away from the city there are ideal hiking routes, as well paragliding spots, such as in the Huajchilla area. He also mentions mountain biking, although apart from the vertiginous Death Road route popular with tourists, it seems that mountain biking is not hugely popular amongst Bolivians either.

Eventually I admit defeat, after failing to reach the top. No one in my party is impressed. They all maintain that a short break was all I would have needed to regain my strength. When I touch down on the ground, even the rock face seems to be regarding me particularly stonily. Despite my failure – and a continued conviction that a break is not a break if it has to be taken twenty feet off the ground – I can doubtless see the appeal of the sport.

Speaking to Dani, I learn more about what Bolivia’s rocks have to offer. Apart from the health benefits and long-lasting friendships of the sport, ‘it gives you the opportunity to be here outside, to be in contact with nature,’ he tells me. ‘I think it’s a privilege greater than the sport or the place, the type of life I have. One that has permitted me to do this – to climb.’

The majority of the climbers we meet in Aranjuez are foreigners. Perhaps, like me, many Bolivians have too strong a love affair with the ground to embrace the sport. Or maybe they are unable to purchase the equipment, which will last for many years but is expensive compared to that of sports like football. I suspect many Bolivians have never even considered climbing or simply wouldn’t know how to get involved.

Dani is one of the creators of BLOQUEando, a yearly climbing event that has been running since 2007. This year, it will take place in late October and early November. The event will bring Bolivian and foreign climbers together for three days of climbing-based activities in the Chalkupunku valley, 220km away from La Paz. Last year, 170 people attended BLOQUEando. A similar number of climbers, from the sport’s small but loyal following, is expected this year.

Looking around at the stunning landscape of Aranjuez, I think of the daily bustle and crowds of life in La Paz, and I’m surprised that more Bolivians don’t come out here; not just for the diversion of climbing, but also for the quiet refuge of the mountains.