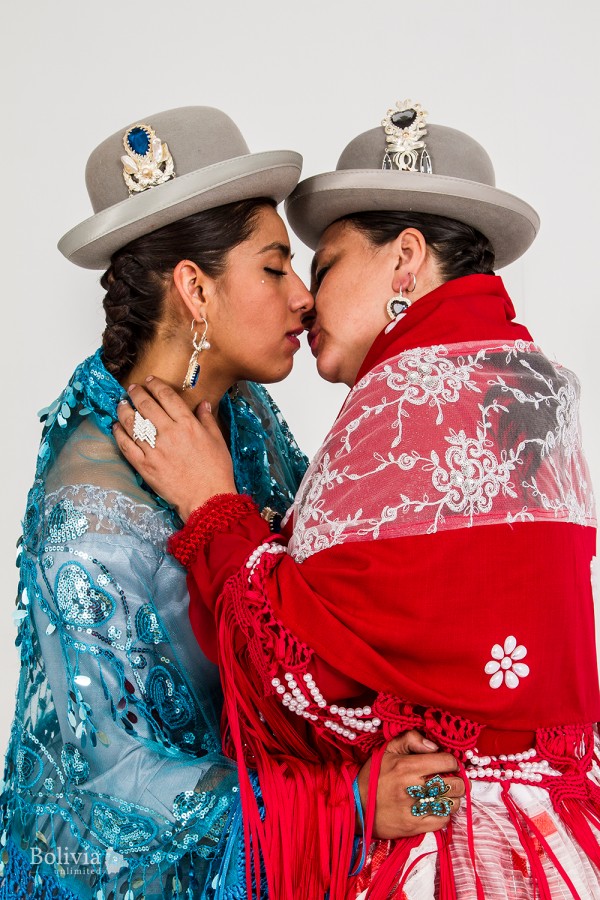 The art of empowerment: feminism, sexuality and the indigenous image

Since its conception in 2016, Beso de Chola, a performance piece and accompanying photo display and video, has been exhibited and debated around the world. I met with its creators, multidisciplinary artists Ivanna Terrazas (a.k.a. María María) and Adriana Bravo, to find out about the controversial performance’s origins and its continued resonance two years on.

Although most well-known for the image of two cholitas kissing in front of the guards on Plaza Murillo, Beso de Chola is only a part of what was a three-day performance in which Bravo and Terrazas transformed themselves into cholitas. Both artists identify as mestizas, and they say that for them the experience of wearing traditional Bolivian indigenous clothes, jewelry and braids was significant. Over the three days, they targeted some of La Paz’s busiest and most recognisable locations – including Avenida Camacho, La Paz’s historic centre and the teleférico, as well as attending a party – accompanied by two hidden photographers. The resulting photos and videos captured Bravo and Terrazas’ passionate kisses as well as the public’s reactions, which ranged from shock and confusion to willful ignorance.

I asked Bravo and Terrazas how such a controversial and influential work came to fruition, and what its intended purpose had been. They must have been asked similar questions many times before, because they both immediately launched into the story of how they had been on a search for seafood one night when they stumbled upon a party near La Paz’s general cemetery. It was full of cholitas drinking and dancing in beautiful yellow dresses, some with tattoos and piercings. They were both taken aback when one partygoer took Terrazas’ hand, unashamedly expressing her desire. Bravo explained how this had been their ‘lightbulb’ moment. ‘When I realised it, it was crazy, it’s like the first kiss, like the loss of innocence,’ she said. ‘And it’s something obvious, if you think about it within any feminist framework. Everyone, mixed race, indigenous, from European descent, kids, old people, we all desire. And when this happens to us, we have to think about it, and this is Beso de Chola.’

‘We don’t just want people to stare at the picture, we want it to open their mind.’

The artists explained some of their aspirations for the performance piece, how racial and class divides in Bolivia were a major motivating factor. As they put it, they wanted to shatter the collective public image of the cholita, that of a proper, matriarchal woman devoid of desire. ‘People think of indigenous women as asexual, like children, like old people,’ Bravo said. However, she was also keen to outline the duality of the issue, that the indigenous status of rich cholitas gives them a certain freedom that white women of the same economic class just do not have. ‘Economic empowerment implies a sexual liberation, and the kiss between two indigenous women in traditional dress is powerful,’ Bravo said. ‘So there are things happening in Bolivia that couldn’t happen in Mexico or Peru.’ Nearly two-thirds of Bolivians identify themselves as indigenous, significantly more than any other South American country, and this creates an opportunity for indigenous empowerment that is unique to Bolivia.

That the photographs and video depict two women kissing is an element which should not be ignored, and which elicited a variety of reactions from the public. One only has to scroll through the Facebook comments to see the controversy they caused, and Bravo and Terrazas said they were handed pamphlets telling them to go to church or were asked to go to a hotel by people in the street. At one point they were even accused of plagiarism by a Peruvian artist, compelling some other Bolivians to defend Beso de Chola. It seems that national pride, in this case, overrode homophobia. It’s clear that Bravo and Terrazas believe passionately in the power of images to provoke change. ‘We don’t just want people to stare at the picture, we want it to open their mind,’ Terrazas said. ‘And even the laws – now Evo Morales and the mayor are saying these things and coming up with positive ideas. And even if we contributed to 1% of this, we have transformed something.’

‘The kiss is an act of resistance, like an act of tenderness in a violent world.’

Terrazas and Bravo spoke with warmth and eloquence about their art, which has a lot of personal resonance for the both of them. Near the end of our interview, Bravo made a statement summarising the mark they hoped Beso de Chola would leave. ‘The kiss is an act of resistance, like an act of tenderness in a violent world,’ she said. Beso de Chola is an example of the possibilities of contemporary Bolivian art, and one hopes it’s not the last collaboration between these two innovative artists.

A full range of pictures, as well as photographs of the process and the performance video, are available to view at besodechola.wordpress.com.