Baking for the Dead 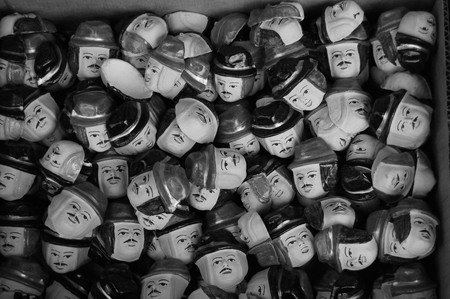 Todos Santos, a tradition in which the living welcome and share with the dead, has existed in some form or another since the beginning of the Spanish Conquest. The apxata is prepared using traditional foods, fruit, sugar cane, onions and photographs of the loved one. T’antawawas, anthropomorphic bread representing the deceased, are one of the central offerings given to the dead on this day. At midday on the 1st of November, the almas visit the house of their loved ones and feast on the goods that have been laid out in their honour, leaving 24 hours later. Families receive the spirits with prayers and offer them the food and drink they enjoyed during their lives. Yet this tradition does much more than simply honour the dead; baking t’antawawas and giving them away in exchange for prayers brings these communities together.

It’s less than a week before Todos Santos - walking through the Max Paredes commercial district of La Paz, one immediately notices the thousands of brightly-coloured t’antawawa masks on display in street stalls. The ceramic eyes of t'anta achachis, horses, babies, cats, cholitas, and llamas stare vacantly at potential customers. As the lady at the stall says 'cada mascarita tiene su significado'; each mask has its own meaning.

Doña Lucy and her husband have been making t’antawawa masks for decades. She explains how baby-shaped masks mark the death of an infant, whereas the figure of a hatless man represents a joven. It is said that horse masks are essential as they accompany the spirits on their journeys; 'ellos llevan todo lo que se reza' - they take back with them all the prayers for the dead. For Doña Lucy, the production of t’antawawa masks is not simply a way of making a living, it is also an important family tradition. Her husband’s mother did so before he was born, and it is clear that this ritual will continue: 'I work with my children in everything I do'.
The artisan mentions how the masks 'used to be clay-white but now they are painted in a flesh-like colour'. In the last decade, novedades such as Shrek, Teletubbies, and Chavo del Ocho (a Mexican show popular across Latin America) have become a sensation, catering for parents keen to engage their children in this tradition. In order to survive it is necessary for traditions such as these to make certain concessions. In her account of Todos Santos, the journalist Cristina Ugidos mentions that traditional masks are the ones left over at the end of the season, while the ones of Shrek are the first to run out. I found scant evidence to support claims that the custom of making t’antawawas is dying. Doña Nancy, arguably the seller of the largest selection and quantity of t’antawawas in the Max Paredes, refutes any claim that this tradition is in decline: ‘I’ve been coming here since I was 15 and sales haven’t gone down in recent years; if anything they’ve gone up’.

Masas al Horno
We walk into a room filled with families - the smell of fresh bread hits you as the heavy door opens. With this sweet smell come heat and chaos; sounds of music, children and laughter. We enter a dark hot room where, in turn, dough is stacked on shelves. There are two lots - the trays where the masa is madurando, and another with dough ready to be baked. At the end of the room is a small metal door which hides the hellish amber glow of the oven. Once opened by the maestro panadero, a wave of heat rushes out. Bread is taken out, unceremoniously thrown into baskets, and carried away while raw dough is shoved in. The door is shut. The heat of the oven makes the stay bearable only for a short while.

We use the following ingredients to make our t’antawawas: 25 pounds of flour,10 eggs, 2.5 pounds of vegetable fat, water, aniseed and yeast, which together yield around 30 pounds of bread. A taxi driver told us that people sometimes offer the maestro panadero a crate of beer for the dough to be brought to the front of the queue during this busy period, especially for large quantities. It is evident that the whole economy in the ovens works in this way. For instance, the person kneading receives bread for his troubles, while the people putting dough on trays receive bottles of Coke or Fanta. In order to bake in the ovens, knowing the recipe and having the ingredients doesn’t suffice- you have to understand the social and economic norms that determine the inner workings of this hive.

I meet Doña Ascencia, who had visited these ovens for the past 6 years following the deaths of two of her children who died in tragic circumstances. Despite this tragedy, Ascencia is adamant that the spirits of her two children take good care of her and her family: things are going well in her business; she has a spot in a new development in El Alto which promises to be the largest commercial centre of its kind in the area. It’s easy to see her commercial success; her son’s 2009 Hummer is parked outside the oven’s main entrance. Baking t´antawawas is her way of taking care of these spirits just as they take care of her. It is said that the almas of the people who die before their time roam the earth for several years looking for peace, making it all the more important to adequately mourn for them.

Day of the Saints
Standing at the entrance of the General Cemetery of La Paz on the 2nd of November, exposed to the bitter wind under the heavy clouds, it is surprising to encounter such a good turnout. Thousands of people roam the vast cemetery and its surroundings; from city men in suits to children and women from the campo, some wearing no shoes.

Some have come to mourn for their dead, others have come to pray and sing for them in exchange for anything from bread to a few Bolivianos. While it is customary not to pay for songs and prayers in cash, many bands demand monetary payment. Nonetheless, this economic and social exchange comes full-circle with the bread baked and offerings being collected by the hundreds of rural families who have come to pray and play music - many leave with several sacks of food to share with their communities. In exchange for the t’antawawas we baked, two boys recite a few padres nuestros for the grandparents of a friend.

Visiting the hornos and cemetery underlined that t’antawawas are much more than a tradition, they are an expression of a cultural practice based on reciprocity. The music, colour and festive atmosphere at Chamoco Chico heightens the celebratory spirit; people come together and remember the past lives of loved ones among alcohol, laughter and t’antawawas. It’s beautiful to see how baking for the dead brings the living together.