Accommodations With a Social Conscience 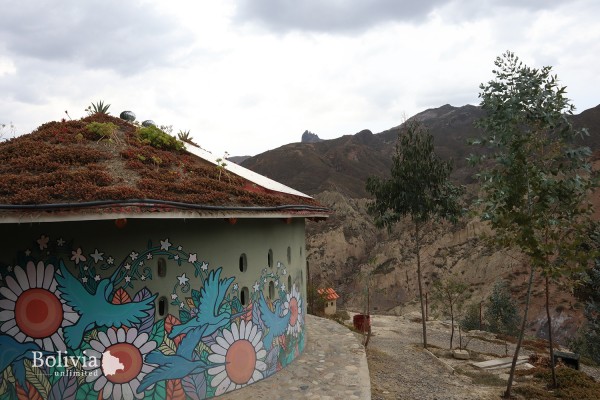 Mountainous rocky peaks, the ‘Valley of Flowers’ and a river running through the bottom of a valley – these are the natural splendours that surround this sanctuary of hospitality and thoughtful design. What started as a response to a dearth of campsites in La Paz has since evolved into one of the top-20 places to glamp – or ‘camp with glamour’ – in the world. ‘I didn’t know the term “glamping”,’ Colibri Camping and Eco Lodge owner and founder Rolando Mendoza says. ‘It’s one of those things you learn as you go.’

Colibri Camping and Eco Lodge has accommodations for all adventure appetites. There are basic areas in which to camp, but also teepees and even cabanas with private bathrooms. It’s clear that the Colibri Camping was created by people who are travellers themselves; it was designed with them, and the environment, in mind. Colibri offers WiFi in the midst of mountainous views and a shop to buy food and toiletries, as well as common areas to meet fellow travellers (including a campfire for chilly high-altitude nights). It combines two things you rarely encounter simultaneously as a traveller: vibe and amenities.

‘Colibri Camping began approximately four and a half years ago,’ Mendoza says. ‘Before that, we already had the initiative Up Close Bolivia, where young people from different parts of the globe come and help with various social programmes in the Mallasa area.’ Mendoza and his wife, Emma Dolan, began receiving and hosting volunteers long before the idea of a camp site was conceived.

‘[Colibri Camping] is not just our idea, it’s the shared idea of everyone [who has come here to volunteer],’ Mendoza says. ‘Everything you see, every tree or plant, has a story of someone who has come here and helped us with the project.’

Mendoza describes the Colibri experience as ‘Peace, tranquility and connection with nature and the local community.’ Guests not only feel at home on the grounds themselves, but in the wider community as well. ‘People often remark, “Wow, the people here [in Jupapina] treat us so nicely,” and that’s because of the previous history of volunteers [in the area],’ Mendoza says.

‘Peace, tranquility and connection with nature and the local community.’

Located in Jupapina (near Mallasa), 40 minutes south of La Paz, Colibri Camping is easily reached by public transport or taxi. Since it’s at a lower altitude than La Paz, its warmer temperatures make it a good place to relax and acclimatise to the altitude. Shops and restaurants are also a short walk from the grounds, and Mendoza will happily recommend where to find the best fresh produce or meal in the area.

Colibri Camping and Eco Lodge is a part of Mallasa’s ecotourist circuit, with plenty of walks and natural wonders in the area. It’s a stone’s throw from some of significant pre-Inca sacred sites, like La Muela del Diablo.

Colibri Camping engages in a number of environmentally sustainable practices to help protect its natural surroundings. It utilises solar energy, water is recycled and its structures are made from local and repurposed materials. ‘We have planted over 1,000 trees and plants,’ Mendoza says.

According to Mendoza, there’s been a steady increase in employment and wages in nearby Mallasa over the years, part of a wider trend in the area involving (eco)tourism as well as cultural and social initiatives. ‘It’s an ethical and sustainable circle creating a better quality of life [for local residents],’ Mendoza says. And it’s another reason why protecting the region’s already fragile ecosystems is of the utmost importance to local community.

Colibri Camping gets its name from one of its most regular visitors, the hummingbird (colibrí meaning hummingbird in Spanish). Giant hummingbirds can be observed frequently on the lodge’s grounds, along with other animals. ‘Every hour has its distinct animals [that pass through Colibri Camping],’ Mendoza says. ‘During the night there are viscachas [a cousin of the chinchilla that looks like a rabbit]. At 7:30am, hummingbirds… At 10am, eagles.’

Giant hummingbirds can be observed frequently on the lodge’s grounds, along with other animals.

Whether you want to escape from La Paz’s hectic hustle and bustle, acclimate yourself to the mountains before heading into the altiplano or simply experience up the amazing Andean landscape and village culture, Colibri Camping and Eco Lodge offers something up for nearly everyone.

For more information, visit the Colibri Camping website at site.colibricamping.com/en/home.