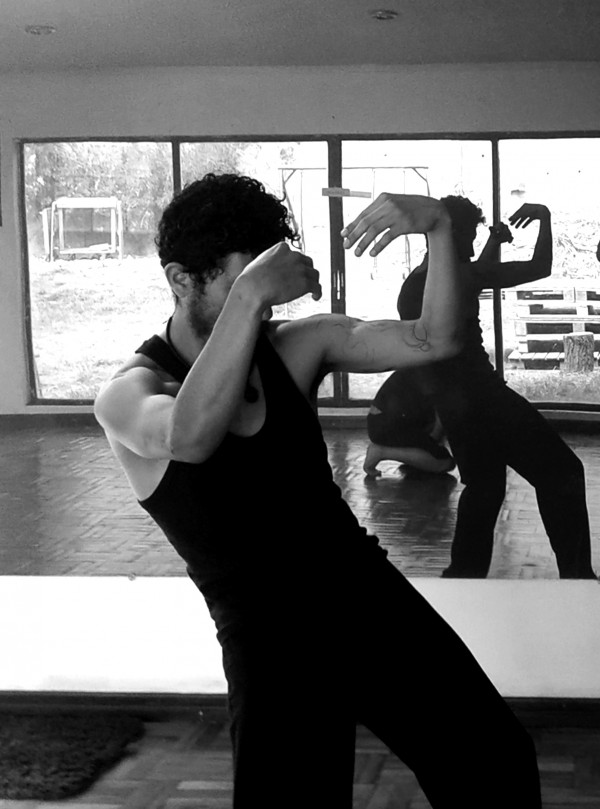 From street performers contorting their bodies before halted cars in the glow of traffic lights, to shuffling feet as the beat of yet another parade drum tremours through the streets, dance is one of the energies that pulses through the charismatic city of La Paz. Performance bursts into parks and plazas, rendering the art of dance not only a privilege for theatre goers but a spirited social presence, a presence that I explore through the eyes of contemporary dancer Omar Ruiz.

I met Omar at his mural-covered studio in the Obrajes neighbourhood of La Paz. When I asked him to discuss his work as a dancer in the city, he began with a disclaimer: what is important is dance as a social, political and artistic force, not ‘Omar the dancer’. ‘There is definitely an ego aspect to performance,’ he admits. ‘However, its importance gets distorted. Dance itself is a force. It’s not about individuals. As a dancer I am merely a facilitator, the communicator of an artistic idea... a middleman.’

This concept of dance as communication, the transmission of a ‘universal language,’ is part of Omar’s definition of the artform. ‘Dance is a global celebration of life,’ he says. ‘Whether that’s celebrating Bolivian folklore in a college parade, or letting your body move ecstatically in a sweaty club at the end of the week. Dance is movement and movement is an expression of vitality. Take sharks for example: if they don’t move, they die.’

Omar specialises in contemporary dance, a style he describes as a transposition of art into the physical. ‘The body is just another artistic tool like graphite or charcoal,’ he explains. ‘Your body becomes your paintbrush and dance allows you to explore its possibilities.’

As I observed a contact improvisation session between Omar and one of his collaborators, this idea of traversing bodily boundaries came to life. The pair moved as though underwater, fluid yet controlled, maintaining contact at all times and reading each other’s bodies to sense the next step. An energy was present between them, one which they had to navigate carefully as the session and their physical exploration progressed.

This improvisational technique prompted a new venture for Omar and two of his friends, a piece of urban dance entitled ‘Improvisación en la Paz’. In this project, the trio set off without a planned sequence or choreography, just two months of improvisational workshops behind them and the sprawling streets of La Paz ahead. In a video of one performance, the dancers crawl, climb, pivot and spring along the pavement, through squares and down steps. The atmospheric film evokes the opening section of the Beat poem ‘Howl’, with Allen Ginsberg’s ‘best minds’ ‘dragging themselves’ through the ‘streets at dawn looking for an angry fix’.

The video exemplifies the architectural inspiration that La Paz offers the bailarines as they essentially ‘dance with the city’. The dancers sculpt their movements to their surroundings, sensing the different dynamic triggered by an expansive park or narrow stairway, allowing their bodies to respond rhythmically to the buildings. Most of the dancing took place in Sopocachi, which, according to Omar, is a neighbourhood that is receptive to art. Omar prefers urban spaces to studios or theatres for his performances, arguing that  theatre goers are often predisposed to react a certain way, whereas the reception of spontaneous urban dance is far more raw.

When I probed the possibility of dancing professionally in the city, Omar sadly reflected, ‘It won’t pay the bills unless you start teaching classes, but it's more than just a “hobby” for me. It’s a lens through which I live my life – dance gives me this constant consciousness of my body. When I get up in the morning, I’m thinking about how my body is waking up, how my feet are getting up.’

Although art is perceived as a privilege in parts of the Global South, where people have to meet basic economic priorities before they can indulge in it, Omar sees art as a necessity. ‘Art doesn’t have to be consumed or bought,’ he says. ‘It is a social presence that isn’t elite. You can dance in a plaza, sing in the street... you don’t need a studio space.’

Dance in Bolivia has even reached the political. No Nos Madrugan is an organisation that danced alongside the disabled in recent protests in La Paz, enriching the campaign with performances on a stage in Plaza San Francisco. ‘Art isn’t a privilege,’ Omar insists. ‘It is integrated into social struggles.’

Omar has taken his philosophies to the streets by working with the Hormigón Armado, a group of La Paz’s famous lustrabotas, or shoeshiners, who publish a newspaper and participate in a variety of job-training and public health workshops. During an improvisational dance workshop with these young kids, Omar was struck by the physical language of many of the participants. ‘They sleep on each other and live together in small spaces on the street, so they have a totally different concept of personal space, an intense tactility,’ Omar points out. ‘This translates into the way they dance. During the contact improvisation I expected them to be reserved, but they threw themselves into it quite literally, falling backwards during trust tests without a second thought.’

‘There was this incredible reaction,’ Omar recalls, as he meditates about the power of dance as a uniting force. ‘Even the difference in dresscode between myself and the kids meant we could physically feel each other as socially disparate. I’m from a different part of town, a part that usually discriminates against them. As we worked closely on a physical level, we broke down these social boundaries. They felt accepted.’

Dance in La Paz functions as more than just a leisure activity. It works as a glue that melds together different parts of society – a ‘universal language’. ‘When you dance you’re in touch with a sensitive side of humanity, you’re perceptive to the difference between humans,’ Omar points out. ‘You notice how his or her body moves differently, leading to a celebration of this diversity.’ Dance can be a celebration of the body in general, allowing it to break out of its socially-constructed confines. As Omar says, ‘Wherever you are, dance is a part of human liberation and acceptance.’