A House of the People? 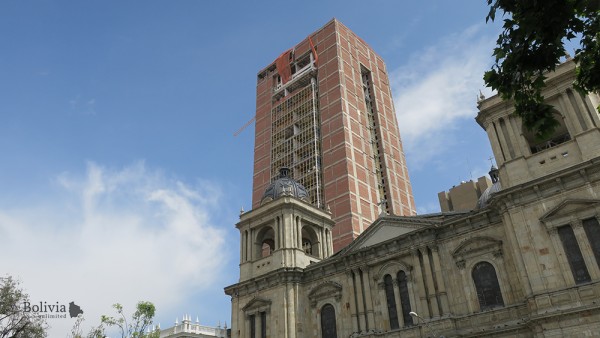 A Blight to Some, an Inclusive Building Project to Others

Can a casa del pueblo be a ‘house of the people’ if the people revile it? That’s the question facing La Paz and the administration of Bolivian President Evo Morales as construction continues on a monolithic tower behind the Palacio Quemado near Plaza Murillo.

The building is easy to spot: Stand in the middle of historic Plaza Murillo, turn southwest and face the Cathedral Basilica of Our Lady of Peace and the Palacio Quemado, and look up. You’ll see the half-finished façade of the 28-story-tall modern rectangular building jutting up behind the colonial curves and muted colours of the governmental palace and the baroque dome of the basilica. It’s a jarring juxtaposition of architectural styles that has many paceños up in arms.

The Casa del Pueblo and a smaller but no less controversial new building will house the executive and legislative branches, respectively. They were conceived in a piece of national legislation that declared their construction a ‘national priority.’ The legislation was a political maneuver, according to Universidad Mayor de San Andrés Architecture Dean Gastón Gallardo Dávila, intended to sidestep city regulations and preservation efforts. ‘These are exceptional laws that allow the construction of these buildings,’ he says. ‘They go above all the municipal regulations.’ Indeed, Marcelo Arroyo, the city’s secretary of planning for development, says, ‘The [federal government] never asked us or started a dialogue to plan these massive constructions without breaking the [municipal] regulations.’

But it’s not only the political expedience that has earned the Casa del Pueblo its share of criticism – it’s also the building’s aesthetics. Former Bolivian president Carlos Mesa has called the edificio an ‘unprecedented aggression’ that ‘destroys’ the historic centre of La Paz. Javier Espejo Brañez, the president of the College of Architects of La Paz, said the Casa del Pueblo ‘breaks the central urban center and the architectural heritage of the city.’

The building is a monument to the ego…. It’s a phallic building.’

In response, Vice President Álvaro García Linera accused Mesa of harboring a ‘racist, classist, and exclusive’ aesthetic. According to the Bolivian Ministry of Planning and Development, the Casa del Pueblo is an homage to ancient Tiwanaku architecture, highlighting the ‘solidity, simplicity, monumentality and symmetry’ demonstrated in the ruins of the ancient civilisation that existed millennia ago on the shores of Lake Titicaca – and of which Bolivians are rightfully so proud.

Gallardo disagrees. ‘No, I don’t think they were thinking about Tiwanaku when they designed this building,’ he says. ‘The building is a monument to the ego…People say it in the street. It’s a phallic building. You can see it from all sides. You can see it from all around the city. It’s an iconic object, badly done.’ He also defends former president Mesa from Vice President Linera’s accusations of racist aesthetics: ‘Carlos Mesa has a Eurocentric view,’ he says. ‘But that doesn't mean that he is racist…Carlos Mesa doesn’t think that way.’

Aesthetics aside, there are many that question the economic feasibility of a building that’s budgeted in at US$36 million – and its necessity. Scheduled to open in January next year, the Casa del Pueblo will reportedly come equipped with medium-grade armour and a helipad.

Susana, an unemployed woman walking by the building’s construction site, looked at its rising façade and said, ‘The money is being wasted. A lot of people don’t have money. We don’t have money to buy bread for our children.’ Another Bolivian, who declined to be named, agreed: ‘Honestly, it’s a waste of money, it could have been used for the poor instead of building this monstrosity.’

Not everyone is opposed to the edificio nuevo, though. Miriam, a secretary who works nearby, said, ‘Yes, it’s good…The doors [of the building will be] open for us to talk, to value our culture…It’s the house of the people; it’s our house – for all.’

But most people’s opinions of the new Casa del Pueblo were concerned with how it looks. And the reviews from el pueblo – those the building is presumably being built for – are decidedly negative. Eriberto, an accountant who works near the new building, said, ‘They say it will be the house of the people [laughs]. I don’t like it very much. It doesn’t match the architecture. It clashes.’

Curiously, according to Gallardo, the names of the architects who designed the building are being kept from the public. Perhaps for good reason: ‘No architect wants to claim that work,’ Gallardo says.

‘The issue of the architectural beauty of La Paz has been ruined by these ghosts, because these are not buildings. They have no use at all.’

Most agree that the building clashes horribly with the surrounding architecture. In a city like La Paz, in which older buildings are frequently demolished to make way for newer constructions, what feeble architectural heritage remains is centered around Plaza Murillo. And, people say, the Casa del Pueblo undermines it. According to Suárez, a man who was sunning himself on the steps to the basilica on Plaza Murillo last month, ‘This place used to be our national heritage, and the government has usurped it for its personal ambitions. This goes against our city.’

Suárez squinted and looked up at the half-finished high-rise that loomed over the 16th-century plaza in which La Paz’s ofttimes turbulent history has played out. Children were running nearby, women were selling drinks and pigeons were flocking in the sky. An early-evening after-work crowd was starting to fill the sidewalks as the presidential guard, dressed in their ceremonial red uniforms, stood at attention at the entrance of the Palacio Quemado. ‘The issue of the architectural beauty of La Paz has been ruined by these ghosts, because these are not buildings,’ Suárez said of the Casa del Pueblo and the new legislative building. ‘They have no use at all. This is a city that can’t be called a city, because these ghosts are offices for people who don’t do anything.’